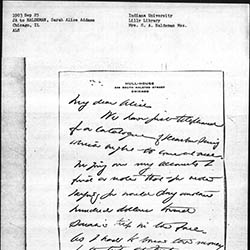 Mary Irvine Hostetter was Jane Addams's step-cousin, niece of Anna Hostetter Haldeman Addams. Hostetter taught music lessons and cared for their two children while her husband was away on naval duty.

Hostetter married Frederick W. Greenleaf in 1872. They had two children, Dorn and Ray, both of whom died in infancy. The couple separated and divorced in the 1890s, but were remarried days before his death in 1903.