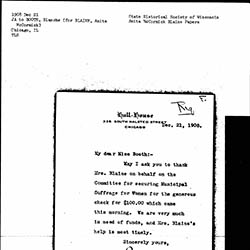 Blanche Booth Angster was secretary to Anita McCormick Blaine. She and her husband lived in the Angster home which was built by architect Frank Lloyd Wright in 1911 at 191 East End Blodgett Road (now 605 Bluff Road), Lake Bluff, Illinois.

Angster married Herman Angster in 1912. They divorced in the 1920s. After their divorce, Angster became reclusive and fenced off the property, allowing the house to slowly deteriorate until it burnt down in 1956. Angster died in 1936.