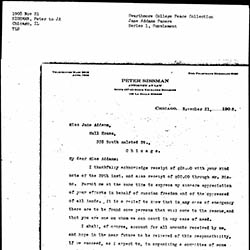 Abraham Bisno was born in Belaya Tserkov, which was in the Kiev region of Russia (now Ukraine). After the Kiev pogrom in 1881, Bisno and his family immigrated to the United States, where Bisno began to work as a tailor in Chicago. Bisno soon became a well-known figure in the American labor movement; in 1890 he founded the Cloakmakers Union, which was the first Jewish Union in Chicago. He was later appointed by the government to be the first factory inspector against the sweatshop system, and he did much in the world of labor legislation. Bisno wrote many articles relating to labor as well, in Yiddish and English newspapers and publications such as the Ladies Garment Worker, Yidishe arbeter-velt (Jewish world of labor), and Forverts (Forward). Near the end of his life, he was a businessman.Bisno gave a speech at Hull-House on women and labor.

Bisno married Sarah Bisno in 1890. They had five children together. Bisno died in 1929.