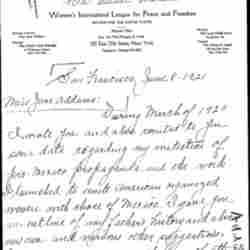 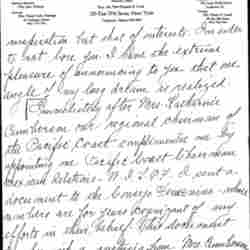 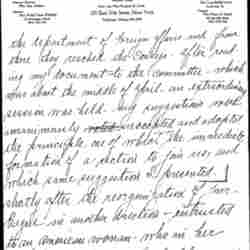 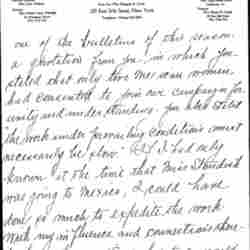 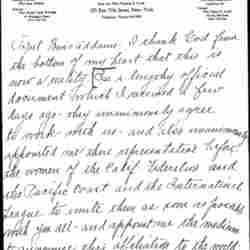 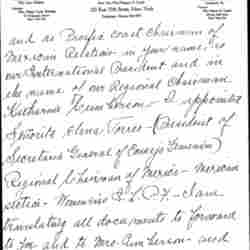 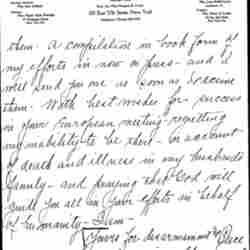 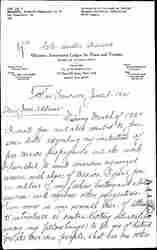 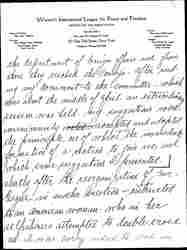 During March of 1920 I wrote you and also [remitted] to you some data regarding my invitation of pro-Mexico propaganda and the work I launched to unite American organized women with those of Mexico. I gave you an outline of my father's history and also my own and various other suggestions. I am now in my seventh year of attempting to introduce a (contradictory education among my fellow beings) to the one of hatred for the Mexican people, that has no other [page 2] inspiration but that of interests. In order to not bore you, I have the extreme pleasure of announcing to you that one angle of my long dream is realized.

Immediately after Mrs. [Katherine] Cumberson our regional chairman of the Pacific Coast complimented me by appointing me Pacific Coast Chairman Mexican Relations -- W.I.L.P.F. I sent a document to the Consejo Femenino -- whose members are for years cognizant of my efforts in their behalf. This document together with a greetings from Mrs. Cumberson I entrusted to a powerful friend of mine in Mexico City. He put our letters through [page 3] the department of foreign affairs -- and from there they reached the Consejo. After reading my document to the committee -- which was about the middle of April -- an extraordinary session was held. My suggestions were unanimously voted ↑accepted↓ and adopted, the principle one of which ↑was↓ the immediate formation of a section to join us, and which same suggestion I presented shortly after the reorganization of your league in another direction -- entrusted to an American woman -- who in her selfishness attempted to double cross me. I was sorry indeed to read in [page 4] one of the bulletins of this season a quotation from you, in which you stated that only two Mexican women had consented to join our campaign for unity and understanding. You also stated "the work under prevailing conditions must necessarily be slow." If I had only known at the time that Miss Standish was going to Mexico, I could have done so much to expedite the work. With my influence and connections there -- perhaps the result at that time would have been different. [page 5]

But Miss Addams -- I thank God from the bottom of my heart that this is now a reality. In a lengthy official document which I received a few days ago -- they unanimously agree to work with us -- and also unanimously appointed me [their] representative before the women of the Calif. Federation and the Pacific Coast and the International League to unite them as soon as possible with you all -- and appoint me the medium to announce this affiliation to the world. In response -- I telegraphed my appreciation [page 6] and as Pacific Coast Chairman of Mexican Relations -- in your name, as our International President and in the name of our Regional Chairman [Katherine] Cumberson -- I appointed Señorita Elena Torres -- (President of Secretaria General of Consejo Femenino) Regional Chairman of Mexico -- Mexican section -- Women's I.L.P.F. -- I am translating all documents to forward to you and to Mrs. Cumberson -- and am forwarding to you names of committee to assist Miss Torres -- as soon as I [receive] [page 7] them. A compilation in book form of my efforts is now on press -- and I will send you one as soon as I receive them. With best wishes for success in your European meeting -- regretting my inability to be there -- on account of death and illness in my husband's family -- and praying that God will guide you in your efforts in behalf of humanity -- I am --

Yours for disarmament ↑and↓ Peace

Seems to use dashes in place of commas