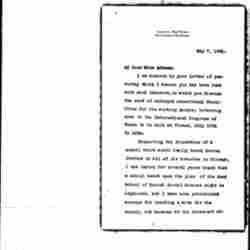 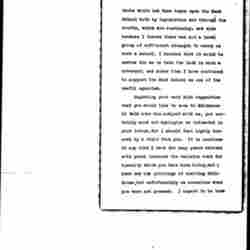 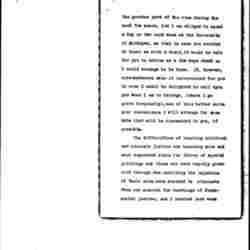 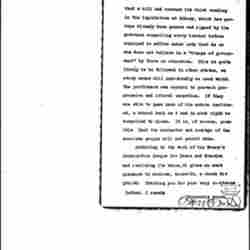 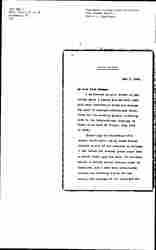 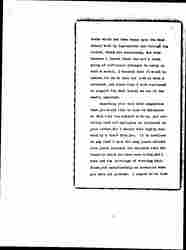 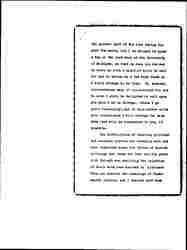 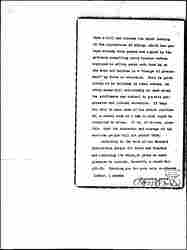 I am honored by your letter of yesterday which I assure you has been read with much interest, in which you discuss the need of enlarged educational facilities for the working people; referring also to the International Congress of Women to be held at Vienna, July 10th to 16th.

Respecting the foundation of a school which would really teach Social Justice in all of its branches in Chicago, I had indeed for several years hoped that a school based upon the plan of the Rand School of Social Science might be organized, and I made some preliminary surveys for locating a site for the school; but because of the incessant attacks [page 2] which had then begun upon the Rand School both by legislation and through the courts, which are continuing; and also because I feared there was not a local group of sufficient [strength] to carry on such a school, I decided that it would be unwise for me to take the lead in such a movement; and since then I have continued to support the Rand School as one of the useful agencies.

Regarding your very kind suggestion that you would like to come to Kalamazoo to talk over the subject with me, you certainly need not apologize as intimated in your letter, for I should feel highly honored by a visit from you. It is needless to say that I have for many years watched with great interest the valuable work for humanity which you have been doing, and I have had the privilege of visiting Hull-House, but unfortunately on occasions when you were not present. I expect to be home [page 3] the greater part of the time during the next few weeks, but I am obliged to spend a day or two each week at the University of Michigan, so that in case you decided to honor me with a visit, it would be well for you to advise me a few days ahead so I could arrange to be home. If, however, circumstances make it inconvenient for you to come I shall be delighted to call upon you when I am in Chicago, (where I go quite frequently), and if this better suits your convenience I will arrange for some date that will be convenient to you, if possible.

The difficulties of teaching political and economic justice are becoming more and more augmented since the forces of special privilege and those who have rapidly grown rich through war, realizing the injustice of their acts, have decided to eliminate from our schools the teachings of fundamental justice; and I learned last week [page 4] that a bill had reached its third reading in the legislature at Albany, which has perhaps already been passed and signed by the governor, compelling every teacher before employed to affirm under oath that he or she does not believe in a "change of government" by force or otherwise. This is quite likely to be followed in other states, as every means will undoubtedly be used which the profiteers can control to prevent progressive and liberal education. If they are able to pass laws of the nature mentioned, a school such as I had in mind might be compelled to close. It is, of course, possible that the character and courage of the American people will not permit this.

Referring to the work of the Women's [International] League for Peace and Freedom and realizing its value, it gives me much pleasure to enclose, herewith, a check for $50.00. Thanking you for your courteous letter, I remain

Todd talks about schools, education, and visiting Addams. He also makes a donation to WILPF.