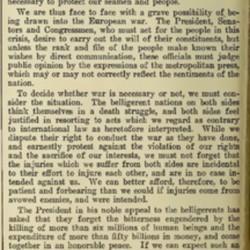 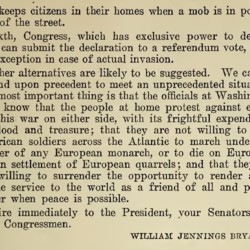 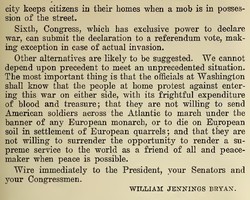 {On account of its suppression by an unsympathetic press, many Friends have been unable to see William J. Bryan's statement given out on February 3d, proposing the six alternatives to war which are causing so much discussion. It is as follows:}

TO THE AMERICAN PEOPLE:

In the presence of threatening dangers, whose magnitude cannot be overestimated, I venture to address my countrymen, justifying my appeal by my interest in their welfare and by their acquaintance with me.

The President has felt it his duty to break off diplomatic relations with Germany for reasons stated in his message, and has announced to Congress his purpose, in case of any overt act, to ask authority to use any means necessary to protect our seamen and people.

We are thus face to face with a grave possibility of being drawn into the European war. The President, Senators and Congressmen, who must act for the people in this crisis, desire to carry out the will of their constituents, but unless the rank and file of the people make known their wishes by direct communication, these officials must judge public opinion by the expressions of the metropolitan press, which may or may not correctly reflect the sentiments of the nation.

To decide whether war is necessary or not, we must consider the situation. The belligerent nations on both sides think themselves in a death struggle, and both sides feel justified in resorting to acts which we regard as contrary to international law as heretofore interpreted. While we dispute their right to conduct the war as they have done, and earnestly protest against the violation of our rights and the sacrifice of our interests, we must not forget that the injuries which we suffer from both sides are incidental to their effort to injure each other, and are in no case intended against us. We can better afford, therefore, to be patient and forbearing than we could if injuries come from avowed enemies, and were intended.

The President in his noble appeal to the belligerents has asked that they forget the bitterness engendered by the killing of more than six millions of human beings and the expenditure of more than fifty billions in money, and come together in an honorable peace. If we can expect such an exhibition of virtue by them, are we not in duty bound to measure up to the standard which we have set for them?

There are several alternatives from which to choose.

First, we can postpone until the war is over the settlement of any dispute which cannot now be settled by peaceful means.

Second, we can keep American citizens off belligerent ships.

Third, we can refuse clearance to ships of the United States and other neutral countries carrying contraband and passengers on the same ship.

Fourth, we can withdraw protection from American citizens who are willing to jeopardize the nation's peace by traveling as seamen with contraband on American or neutral vessels.

Fifth, we can, if necessary, keep all American vessels out of the danger zone for the present, just as the Mayor of a [page 2] city keeps citizens in their homes when a mob is in possession of the street.

Sixth, Congress, which has exclusive power to declare war, can submit the declaration to a referendum vote, making exception in case of actual invasion.

Other alternatives are likely to be suggested. We cannot depend upon precedent to meet an unprecedented situation. The most important thing is that the officials at Washington shall know that the people at home protest against entering this war on either side, with its frightful expenditure of blood and treasure; that they are not willing to send American soldiers across the Atlantic to march under the banner of any European monarch, or to die on European soil in settlement of European quarrels; and that they are not willing to surrender the opportunity to render a supreme service to the world as a friend of all and peacemaker when peace is possible.

Wire immediately to the President, your Senators and your Congressmen. 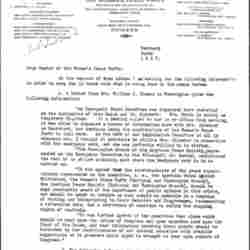 Bryan lays out six alternatives to war and urges readers to alert them to the President and their Congressmen.

This text was published in various journals and newspapers.