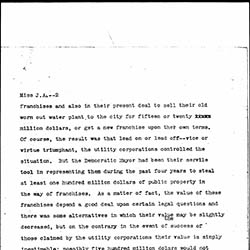 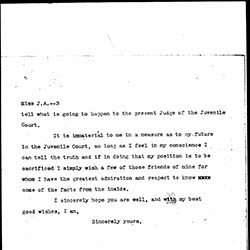 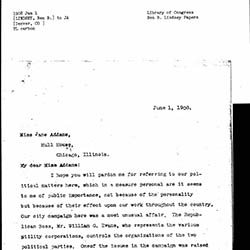 I hope you will pardon me for referring to our political matters here, which in a measure personal are it seems to me of public importance, not because of the personality but because of their effect upon our work throughout the country. Our city campaign here was a most unusual affair. The Republican Boss, Mr. William G. Evans, who represents the various utility corporations, controls the organizations of the two political parties. One of the issues in the campaign was raised by the failure of the Democratic Mayor (who had been named and elected by Mr. Evans) to close the saloons on Sunday and to prohibit public gambling. He boldly announced that his policy of the past would be his policy in the future, and the church, as a rule, got into politics to oppose him. The Boss saw the danger, and he sent for a young man, who owed his political position to the Boss in the Republican party, and gave him the nomination on the Republican ticket for Mayor with the understanding that he could represent the church element. Of course, if the church element was stronger than the gambling element (liberal element) and this young man was elected on the Republican ticket, the boss expected to use him in protecting his [page 2] franchises and also in their present deal to sell their old worn out water plant to the city for fifteen or twenty million dollars, or get a new franchise upon their own terms. Of course, the result was that lead on or lead off -- vice or virtue triumphant, the utility corporations controlled the situation. But the Democratic Mayor had been their servile tool in representing them during the past four years to steal at least one hundred million dollars of public property in the way of franchises. As a matter of fact, the value of these franchises depend a good deal upon certain legal questions and there was some alternatives in which their value may be slightly decreased, but on the contrary in the event of success of those claimed by the utility corporations their value is simply inestimable; possibly five hundred million dollars would not cover the case. And since they own the two parties and are naming the judges whom they are to elect next fall, the probabilities are that the latter alternatives, those favoring the interests, will be the ones finally used. I found the situation so disgusting that I took no part in the campaign, for to have told the truth about it could not have helped either side, and the real great questions involved were thus confused and made ridiculous by the commercialization of politics. However, I attended a conference with Dr. Graham Taylor recently at Colorado Springs and a part of the address I delivered there I enclose. You see I have named our rich malefactors. And since they own the two parties as business assets you can likely [page 3] tell what is going to happen to the present Judge of the Juvenile Court.

It is immaterial to me in a measure as to my future in the Juvenile Court, so long as I feel in my conscience I can tell the truth and if in doing that my position is to be sacrificed I simply wish a few of those friends of mine for whom I have the greatest admiration and respect to know some of the facts from the inside.

I sincerely hope you are well, and with my best good wishes, I am,

Lindsey writes Addams about corruption within the political parties in Denver.

I did not know how to mark up illegible strike outs.