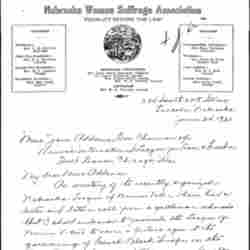 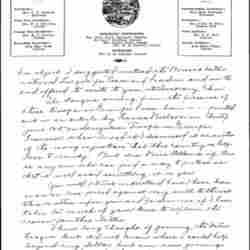 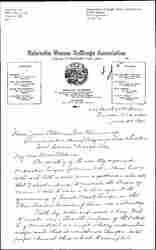 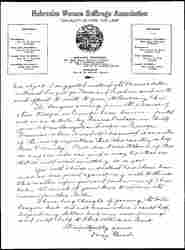 As secretary of the recently organized Nebraska League of Women Voters I have had a letter and later a call from a gentleman who asks that I shall endeavor to persuade the League of Women Voters to raise a protest against the garrisoning of French Black Troops on the Rhine Border because of their vice and cruelty.

Both by letter and word I have tried to make clear that the purpose of the National L. of Women Voters are as yet wholly national in scope and that it would not therefore be the proper channel [through] which to accomplish [page 2] his object. I suggested instead the Women's International League for Peace and Freedom, and, in the end, offered to write to you, its Honorary Chm.

The dangers arising from the presence of these troops in Europe have been even pointed out in an article by Francis Nielson in Unity, June 10th, on Senegalese Troops in Europe. However, when I read it, I dismissed it as another of the many injustices that this country is helpless to remedy. But, dear Miss Addams, if there is anyone who can find a way to protest so that it will avail something, it is you.

You will, I trust, understand how I have been more or less forced against my will to thrust this matter upon you and pardon me if I have taken too much of your time to explain the reason for this letter.

I have long thought of joining the Inter. League but did not know where I could help beyond my dollar but am now joining and will help to that extent, at least. 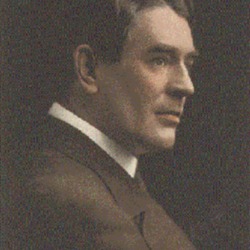 Gund asks Addams to have the Women's International League for Peace and Freedom protest France's stationing of black soldiers in the Rhine due to reports of cruelty.