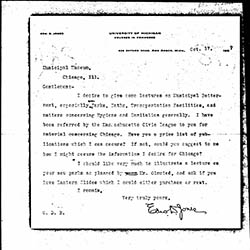 Edward David Jones was an economist. He received a Master's from Ohio Wesleyan University and then a Ph.D. from the University of Wisconsin. Jones then worked as a professor of economics at the University of Wisconsin before becoming a professor of commerce and industry at the University of Michigan. Jones also worked for the Department of Education and Social Economy of the United States Commission to the Paris Exposition as an Expert in Social Economy. He was also a member of the American Economic Association, the Michigan Political Science Association, the National Geographic Society, and the Political Economy Club of Chicago. Jones lectured on economics and was the author of Economic Crises: the People and the Country and Resources and Industries of the United States.