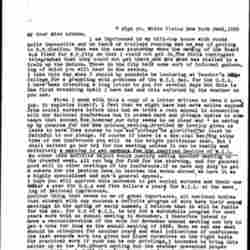 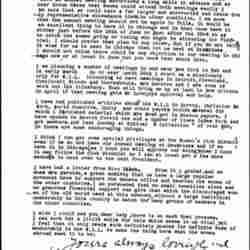 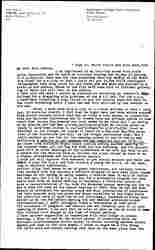 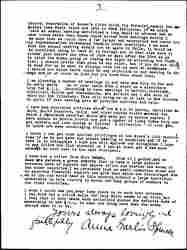 I am imprisoned in my hill-top house with roads quite impassible and no taxis or trolleys running and no way of getting to R.R. station. That was the case yesterday when the meeting of the Board was fixed for N.Y. City so that I could not get in. The Phila contingent telegraphed that they could not get there, and Mrs Mead was stalled in a train up the Hudson. Those in the City held some sort of informal gathering of which you will hear in due season.

I take this day, when I should by schedule be lecturing at Teacher’s College, for a grappling with problems of the W.I.L. Sec. for the U.S.A. I have been intending a long letter to you for several days but this is the first breathing spell I have had and this enforced by the weather as you see.

First I send with this a copy of a letter written to Owen R Lovejoy. It explains itself. I feel that we might have had more active support from social workers before this had we tried a real appeal in connection with the National Conference but it seemed hard and perhaps unwise to attempt that sooner. Now, however, our duty seems to me clear and I am saving up my pennies for the New Orleans meeting. Provided Mr Lovejoy gives us leave to have "free course to run" and perhaps “be glorified,” at least be faithful to our pledge. Of course if there is a special meeting at the time of the Conference you will be the bright particular star. But I shall neither go nor try for the meeting unless it can be really and definitely a meeting to get members for the American Section of W.I.L. No other less definite object would justify adding another meeting to the crowded week. All can beg for food for the starving, and for general good will in other meetings of the Conference. If we have any duty to get members for the Section here, to hearten the women abroad, we have it as a highly specialized and not a general appeal.

I hope you will approve this movement to get social workers and their one dollar a year for U.S.A. and five dollars a year for W.I.L. at the meeting of National Conference.

Another thing that seems to me of great importance. All national bodies that attempt with any success a definite program of work have [annual] meetings in the spring or early summer. I believe that it will be futile for the Sec. for U.S. of W.I.L. to try for worthwhile program for next years work with an annual meeting in November. I therefore intend to move a reconsideration of the vote for November annual meeting and try to get a vote for June as the annual meeting of 1920. Then we can see what should be attempted for another year and what indications of usefulness the last season’s work has given and place ourselves on the right basis for practical work if such can be our privilege. I intended to bring this matter up at the Feb. 5 Board meeting but the weather prevented proper representation. I shall therefore issue a referendum on that point for [consensus] of judgment and then we can act formally upon it at next meeting of Board. I am sure that no trial of what we can do would be fair without this change in the time of annual meeting.

I have another suggestion in connection with this change in annual meeting. I wish to add to the direct appeal in connection with the National Conference (the direct appeal to social workers) another direct appeal, and that to the Club women. I think it might be a fine thing for us to hold our annual meeting next June at the same place that the [page 2] General Federation of Women’s Clubs holds its Biennial, namely Des Moines, Iowa. Their dates are 16th to 23rd inclusive. If we could have an annual meeting advertised a long while in advance and so near these dates that women could attend both meetings easily I am sure that we could have a far larger and more varied and hence truly representative attendance [than] in other condition. I am sure that the annual meeting should not be again in Phila. It would be an excellent thing to have it in Chicago and in that case have it either just before the 16th of June or just after the 23rd so as to catch the women going or coming who might be attending the Biennial. I should prefer that plan to any other. But if you do not think it wise for us to meet in Chicago then let us meet at Des Moines. I should not think there could be any objection to our meeting in Chicago now, or at least in June, but you know best about that.

I am planning a number of meetings in and near New York in Feb and in early March.  On or near March 20th I start on a missionary trip for W.I.L. intending to have meetings in Detroit, Cleveland, Cincinnati, Toledo and thereabouts. Mrs Karsten and I are soon to work out the itinerary. That will bring me up at last to New Orleans in April if that meeting gets Mr Lovejoys approval and help.

I have had published articles about the W.I.L. in Survey, Christian Work, World Tomorrow, Unity and other papers beside several for which I furnished material which Mrs Mead got in Boston papers. I have spoken in Boston, [Providence] and a number of times in New York and got members. And last Sunday at Ethical “a collection” of over $80. So there are some encouraging things.

I think I can get some special privileges at the Women’s Club Biennial even if we do not have our Annual meeting at Des Moines and if we have it in Chicago (as I hope you will approve our doing) then I hope it may follow the Club Biennial so I can at least get a few more members to hand over to the next President.

I have had a letter from Miss Balch. From it I gather, and so does Mrs Karsten, a great anxiety that we have a large popular movement here to support the Geneva office and hearten the women of the other countries. I am persuaded that no small committee alone and no generous financial support can give that which the discouraged women of the old world need at this moment, without a large individual membership in this country to match the many groups of members in the other countries.

I wish I could see you, dear lady, there is so much that presses. I can work but a little while for this which seems to me vital. But I feel that it only needs work definitely pushed for definite ends of membership in the W.I.L. to make the thing here what the women abroad want it to be. 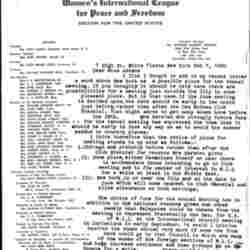 Spencer updates Addams on the activities of the American WILPF section.