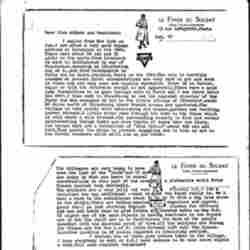 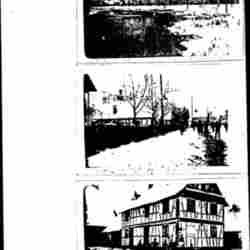 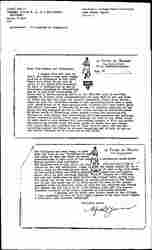 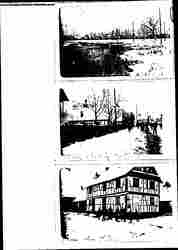 I sailed from New York on Jan. 4 and after a very good voyage arrived at Liverpool on the 16th. There were about 50 men and 35 girls in the party. From Liverpool we went to Southampton by way of Winchester, spending an interesting day at W., and from Southampton to Paris via Le Havre, reaching Paris on the 19th. The city is terribly crowded at present. Hotel accommodations are very hard to get and such as there are are very poor and equally expensive. There is no butter, sugar or milk but otherwise enough to eat apparently. There were a good many formalities to be gone through [within] Paris and I was there until the 24th. I then went to Strasbourg to see the regional director of the Foyer and was assigned by him to the little village of Offendorf, about 20 miles north of Strasbourg where French troops are quartered. The village is very pretty with interesting old houses, gardens and rambling narrow streets. A little river runs through the town to the Rhine which is only about a mile distant. The surrounding country is flat and rather uninteresting though there are nice tracks of woods here and there. The troops here are a [battalion] of "Blue Devils" -- about 400 men all told. They patrol the Rhine to prevent smuggling and to keep an eye on the German steamers which still, run the river. [page 2]

The villagers are very happy to have seen the last of the "boche" and if one can judge by what one hears in casual conversations in this part of the country a [plebiscite] would favor French control very decidedly.

The soldiers are a very jolly and very friendly lot. I run a miniature one man settlement -- that is what the Foyer really is. We have a room in the schoolhouse about 30 by 40 ft with a big iron stove in the middle. There are tables, benches, magazines and papers, games etc. I am just starting English classes for officers and men and later hope to give little illustrated talks on the U.S. Of course one of the main objects in having Americans in the Foyers now if not the chief one is to familiarize the mass of the people somewhat with the American point of view. All the soldiers are strong for Wilson and for the L. of N. (with Germany left out). The Alsace-Lorraine question is of course regarded as absolutely settled.

I enclose two or three poor photos taken in the village. I hope everybody is well at H. H. I need someone to do door seven nights a week. Will some resident volunteer? 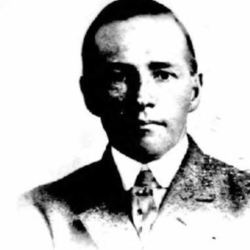 Yeomans tells Addams about conditions in Europe and the relief work he is doing.