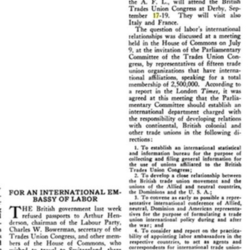 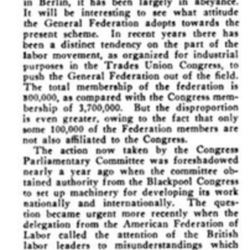 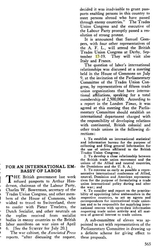 FOR AN INTERNATIONAL EMBASSY OF LABOR

THE British government last week refused passports to Arthur Henderson, chairman of the Labour Party, Charles W. Bowerman, secretary of the Trades Union Congress, and other members of the House of Commons, who wished to travel to Switzerland, there to confer with Pieter Troelstra, the Dutch Socialist, and other neutrals on the replies received from socialist bodies in enemy countries to the British labor manifesto on war aims of April 6. {See the SURVEY for July 20.}

The war cabinet, the Associated Press reports, “after discussing the request, decided it was inadvisable to grant passports enabling persons in this country to meet persons abroad who have passed through enemy countries.” The Trades Union Congress and the executive of the Labour Party promptly passed a resolution of strong protest.

It is announced that Samuel Gompers, with four other representatives of the A.F.L., will attend the British Trades Union Congress at Derby, September 17-19. They will visit also Italy and France.

The question of labor’s international relationships was discussed at a meeting held in the House of Commons on July 9, at the invitation of the Parliamentary Committee of the Trades Union Congress, by representatives of fifteen trade union organizations that have international affiliations, speaking for a total membership of 2,500,000. According to a report in the London Times, it was agreed at this meeting that the Parliamentary Committee should establish an international department charged with the responsibility of developing relations with continental, British colonial and other trade unions in the following directions:

1. To establish an international statistical and information bureau for the purpose of collecting and filing general information for the use of unions affiliated to the British Trades Union Congress;

2. To develop a close relationship between the British trade union movement and the unions of the Allied and neutral countries, the Dominions and the U.S.A.;

4. To consider and report on the practicability of appointing labor ambassadors in the respective countries, to act as agents and correspondents for international trade unionism and to be responsible for supplying international [centers] with up-to-date information respecting trade union activity and all matters of general interest to trade unions.

A sub-committee of eleven was appointed to act with representatives of the Parliamentary Committee in drawing up a definite scheme for giving effect to these proposals. [page 2]

The project of an international organization of trade union movements is not new, says the London Times:

For nearly twenty years the General Federation of Trade Unions, of which Mr. W. A. Appleton is secretary, has been linked up with the trade union movements of other countries by means of a permanent secretariat and periodical conferences. During the war, owing to the fact that the headquarters of this international movement were in Berlin, it has been largely in abeyance. It will be interesting to see what attitude the General Federation adopts towards the present scheme. In recent years there has been a distinct tendency on the part of the labor movement, as organized for industrial purposes in the Trades Union Congress, to push the General Federation out of the field. The total membership of the federation is 800,000, as compared with the Congress membership of 3,700,000. But the disproportion is even greater, owing to the fact that only some 100,000 of the Federation members are not also affiliated to the Congress.

The action now taken by the Congress Parliamentary Committee was foreshadowed nearly a year ago when the committee obtained authority from the Blackpool Congress to set up machinery for developing its work nationally and internationally. The question became urgent more recently when the delegation from the American Federation of Labor called the attention of the British labor leaders to misunderstandings which had arisen between the American and European movements owing to lack of definite communication between the respective organizations. It was, in fact, suggested by one of the American spokesmen that the British movement should consider the possibility of initiating an international labor policy, whereby labor representatives would be attached to the various embassies of the world. The present plan is less ambitious. It aims at the establishment of a permanent bond for industrial purposes only -- the counterpart in industrial matters of the International Socialist Bureau in political matters -- between the organized workers of the world. It is noteworthy that the Central Powers are excluded from the provisional scheme. 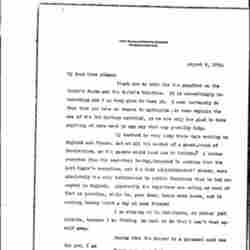 A discussion of efforts to block labor activists from traveling in England and making international connections with other labor groups.