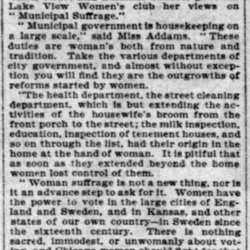 "Municipal government is housekeeping on a large scale," said Miss Addams. "These duties are woman's both from nature and tradition. Take the various departments of city government, and almost without exception you will find they are the outgrowths of reforms started by women.

"The health department, the street cleaning department, which is but extending the activities of the housewife's broom from the front porch to the street; the milk inspection, education, inspection of tenement houses, and so on through the list, had their origin in the home at the hand of woman. It is pitiful that as soon as they extended beyond the home women lost control of them.

"Woman suffrage is not a new thing, nor is it an advance step to ask for it. Women have the power to vote in the large cities of England and Sweden, and in Kansas, and other states of our own country -- in Sweden since the sixteenth century. There is nothing sacred, immodest, or unwomanly about voting, and Chicago women should fight for that power.

"I don't like the name of 'women's rights.' That is worn out. But rather 'women's duty.' That never will grow old."

Addams gave an address to the Lake View Women's Club about her views on woman suffrage at the municipal level of government.