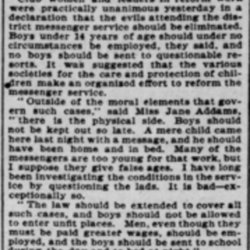 WOMEN TAKE A HAND IN EFFORT TO PROTECT THE BOYS.

Demand That Children Under Fourteen Years of Age Be Kept Out of the Service and That Men Be Employed Where Errand Calls for Visits to Questionable Places -- Jane Addams and Mrs. Theodore Thomas Deplore Existing Conditions.

Club women and leaders in reform work were practically unanimous yesterday in a declaration that the evils attending the district messenger service should be eliminated. Boys under 14 years of age should under no circumstances be employed, they said, and no boys should be sent to questionable resorts. It was suggested that the various societies for the care and protection of children make an organized effort to reform the messenger service.

"Outside of the moral elements that govern such cases," said Miss Jane Addams, "there is the physical side. Boys should not be kept out so late. A mere child came here last night with a message, and he should have been home and in bed. Many of the messengers are too young for that work, but I suppose they give false ages. I have long been investigating the conditions in the service by questioning the lads. It is bad -- exceptionally so.

"The law should be extended to cover all such cases, and boys should not be allowed to enter unfit places. Men, even though they must be paid greater wages, should be employed, and the boys should be sent to school during the day and to bed at night."

"The matter should be easy to handle," said Mrs. Theodore Thomas, President of the Anti-Cruelty Society. "There are 200 societies in the city whose whole aim is to care for children, and they should be able to get at the root of the trouble.

"I do not believe in taking a child from his surroundings, no matter how bad they may be, unless conditions can be bettered and the child can be watched for years afterwards by some one who is willing to be a practical guardian. Merely stopping the use of boys by law will do no good, as some other work must be provided. If the messenger service could be reformed the boys would be best served."

Other women expressed the opinion that men should be substituted for boys, especially during the night hours, and that agents of the law should see that those under 14 years of age be compelled to attend school, instead of working.

Addams and Thomas argue why boys 14 and younger should be sent to school rather than work as messengers.