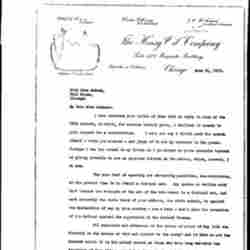 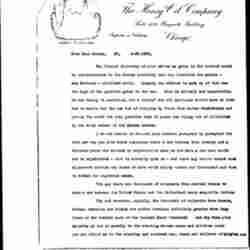 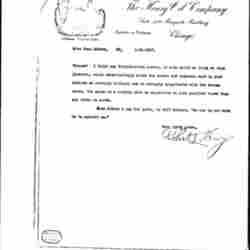 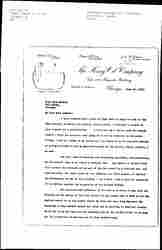 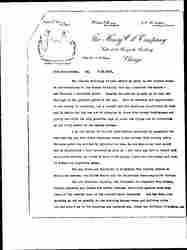 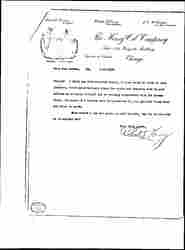 I have received your letter of June 14th in reply to mine of the 13th instant, in which, for reasons therein given, I declined to accede to your request for a contribution. I note you say I should read the speech itself -- which you enclose -- and judge of it not by comments in the press. Perhaps I was too modest in my letter as I preferred to quote comments instead of giving directly to you my personal beliefs in the matter, which, however, I do now.

The mere fact of speaking and advocating passivism, [nonresistance], at the present time is in itself a disloyal act. Any spoken or written word that lessens the strength of the arm of the Government is a disloyal act, and most assuredly the whole trend of your address, the whole appeal, is against the declaration of war by this country -- now a fact -- and a plea for cessation of the defense against the aggression of the Central Powers.

All arguments and addresses of the nature of yours of May 15th are directly in the nature of "aid and comfort to the enemy" and if this is not the desired result it is the actual result as those who have long believed the teachings of Jane Addams cannot but think she is striving to show her country is in the wrong and that you are teaching that no man should enlist in an army for the protection of America and its free institutions. [page 2]

The literal following of your advice as given in the address would be [nonresistance] to the German brutality that has horrified the entire -- non Teutonic -- civilized world. Largely the address is made up of what was the hope of the pacifist prior to the war. This is untimely and unpatriotic. We are facing "a condition, not a theory" and all Americans should have in view and in desire but the one end of stopping by force this German brutishness and giving the world the only possible hope of peace and wiping out the militarism by the total defeat of the German armies.

I do not desire to dissect your address paragraph by paragraph but must ask you why you cite three instances where a war between this country and a European power was avoided by adjudication when we now have a war that could not be adjudicated -- that is actually upon us -- and where any action toward such adjustment outside the force of arms would simply weaken our Government and tend to defeat our righteous cause.

You say there are thousands of emigrants from Central Powers to whom a war between the United States and the fatherland means exquisite torture.

Why not remember, equally, the thousands of emigrants from Russia, Poland, [Romania] and Serbia who suffer tortures infinitely greater when they learn of the bestial acts of the Central Power invaders? And why does your sympathy go out so greatly to the starving German women and children while you are silent as to the starving and enslaved men, women and children of Belgium and [page 3] France? I think any disinterested person, if such could be found at this juncture, would unhesitatingly place the spoken and unspoken word in your address as strongly disloyal and as strongly sympathetic with the German cause, the cause of a country more in opposition to your pacifist views than any other on earth.

Miss Addams I can but quote, in full believe, "He who is not with me is against me." 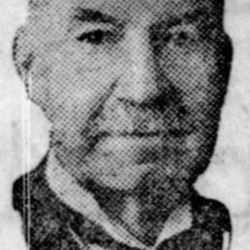 Henry tells Addams that he disagrees with her views on pacifism and sees her as unpatriotic and pro-German.