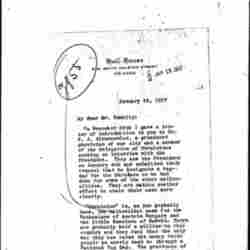 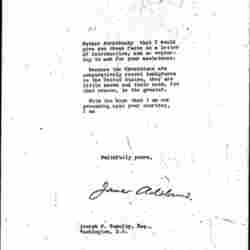 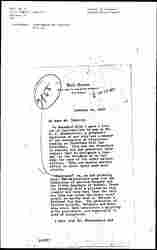 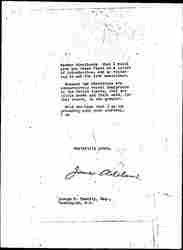 On December 28th I gave a letter of introduction to you to Dr. W. J. [Sieminowicz], a prominent physician of our city and a member of the delegation of Ukrainians seeking an interview with the President. They saw the President on January 4th and submitted their request that he designate a [tag day] for the [Ukrainians] as he had done for some of the other nationalities. They are making another effort to state their case more clearly.

"Ukrainian" is, as you probably know, the nationalist name for the Ruthenians of Austria Hungary and the little Russians of Russia. There are probably half a million in this country and they feel that the only way they can raise the money their people so sorely need is through a National Tag Day. The provinces of Eastern Galicia, Volhynia and [Bukovina] where they constitute a majority of the population, are especially in need of assistance.

I have told Dr. [Sieminowicz] and [page 2] Father [Strutynsky] that I would give you these facts in a letter of introduction, and am venturing to ask for your assistance.

Because the Ukrainians are comparatively recent immigrants to the United States, they are little known and their need, for that reason, is the greater.

With the hope that I am not presuming upon your courtesy, I am

Addams asks Tumulty to intervene to create a special day for Ukranians to enable them to raise relief funds.