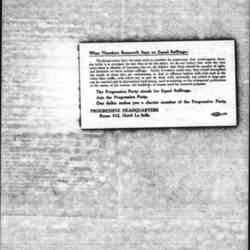 Workingwomen have the same need to combine for protection that workingmen have; the ballot is as necessary for one class as for the other; we do not believe that with the two sexes there is identity of function; but we do believe that there should be equality of right; and therefore we favor woman suffrage. Surely if women could vote, they would strengthen the hands of those who are endeavoring to deal in efficient fashion with evils such as the white slave traffic; evils which can in part be dealt with nationally, but which in large part can be reached only by determined local action, such as insisting on the widespread publication of the names of the owners, the landlords, of houses used for immoral purposes.

A promotional postcard urging women to vote for the Progressive Party because it stands for woman suffrage.