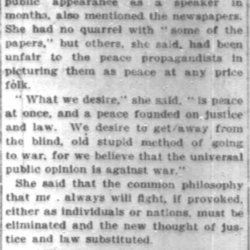 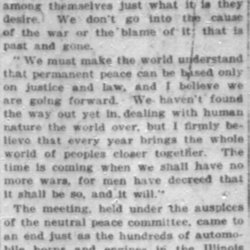 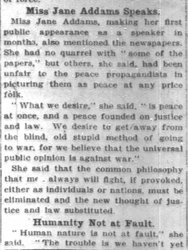 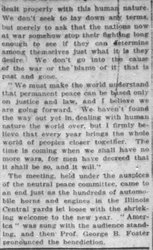 Miss Jane Addams, making her first public appearance as a speaker in months, also mentioned the newspapers. She had no quarrel with "some of the papers," but others, she said, had been unfair to the peace propagandists in picturing them as peace at any price folk.

"What we desire," she said, "is peace at once, and a peace founded on justice and law. We desire to get away from the blind, old stupid method of going to war, for we believe that the universal public opinion is against war."

She said that the common philosophy that men always will fight, if provoked, either as individuals or nations, must be eliminated and the new thought of justice and law substituted.

Humanity Not at Fault.

"Human nature is not at fault," she said. "The trouble is we haven't yet [page 2] dealt properly with this human nature. We don't seek to lay down any terms, but merely to ask that the nations now at war somehow stop their fighting long enough to see if they can determine among themselves just what it is they desire. We don't go into the cause of the war or the blame of it; that is past and gone.

"We must make the world understand that permanent peace can be based only on justice and law, and I believe we are going forward. We haven't found the way out yet in dealing with human nature the world over, but I firmly believe that every year brings the whole world of peoples closer together. The time is coming when we shall have no more wars, for men have decreed that it shall be so, and it will."

The meeting, held under the auspices of the neutral peace committee, came to an end just as the hundreds of automobile horns and engines in the Illinois Central yards let loose with the shrieking welcome to the new year. "America" was sung with the audience standing, and then Prof. George B. Foster pronounced the benediction.

During an event held at the Orchestra Hall in Chicago, Addams argues for a peace based on justice and law.