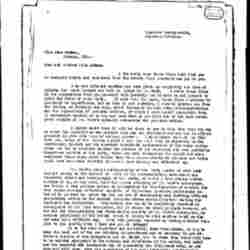 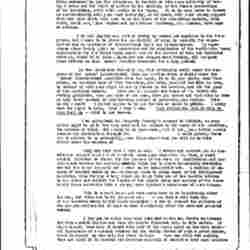 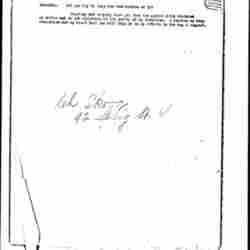 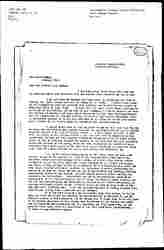 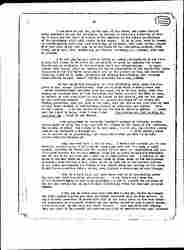 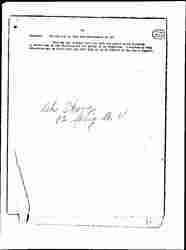 I fervently hope these lines will find you in restored health and recovered from the strain which overwork has put on you.

I am not informed whether you have given up completely the idea of joining the Peace Mission now left on Europe by Mr. Ford. I write these lines in the supposition that you yourself will probably not be able to and present to guide the steps of that Party. If such were the case, these lines I address to you would be superfluous, but as this is not provable, I risk to address you from the feeling of devotion and duty, which forces me to risk even misinterpretation and the supposition of personal motives, of which I know myself completely free. My conscience compels me to try and save what is possible out of the much endangered results of Mr. Ford’s splendid enthusiasm and generous action.

I cannot doubt that it will be clear to you by this time that the way in which the [expedition] was entered upon was too over-hastened and too [insufficiently] prepared to give real hope of serious success. I also cannot deem it possible that you, being of the serious spirit I know you must feel in objection to the unnecessary by-work and the somewhat theatrical incineration of the whole matter which has led to enormous expense for numbers of not essential and even partially disastrous members of the party, which not only endangered the result but also swallowed funds which never before have been so generously at disposable and which could have been made fruitful in such a more lasting and effective way.

Mr. Ford’s sudden relinquishing of the Party speaks of some such insight coming to him himself in spite of the contradicting news about his [forcible?] return and later joining of the party, of which I have strong doubts. Certain it is, at any rate, that the sudden starting of Mr. Ford’s enterprise, has broken a very serious action in preparation for the formation of a small but very impressive and effective Committee of high-class American politicians intended to go over to Europe for the purpose of encouraging and inciting official preparatory action in the neutral European states without further waiting for America’s own initiative. This action has had to be completely canceled in consequence of the Ford enterprise, and it cannot be taken up again because, after all the disappointing and discouraging results of Mr. Ford’s enterprise, no serious politician of the United States is likely to risk another trial on the now much more difficult way. (You will perhaps remember my having outlined this plan to you shortly when I last saw you in Chicago).

It is the more important and essential, dear Miss Addams, to try to make the best out of the now existing circumstances and to endeavor to get effective results of the delegation now in Europe, but to reach this there will have to be a total [change?] in the methods and directions of its action, but until now the boastful and incoherent way of proceeding has frightened away, as you yourself will know, even the correction of the very idealistic Scandinavians, at least to any effective degree. [page 2]

I now come to ask you, in the name of the Cause, and under risk of being condemned by you for arrogance, to install me with some authority of having a voice and the right of advice in the handling of the future proceedings of the Committee, which will settle in The Hague. It is in your power to invest me confidentiality with some such authority, or at least, with such strong support from your side which will open to me the doors of the consulting members, from which, until now, Miss [Schwimmer] and your former secretary, Mr. [Lochner], have kept me outside.

I am not playing any part or having my person put anywhere in the foreground, but I want to be given the possibility of using my capacity for organization and my knowledge of international right and circumstances. My experience since twenty years as Peace worker and as organizer of the world-wide [Women's] organization for the first Hague conference in the service of this now initiated movement, which if it fails, endangers and damages most fatally, all European Peace efforts as also Women's Pacifist movements for a long period.

As the Commission formed by Mr. Ford officially sails under the auspices of the Women's International Peace Association which probably means the Women's International Committee from The Hague, it is in your power, dear Miss Addams, as American head of this formation, and being yourself not able to come, to entrust me with some right to use my forces in the service, and for the good of this critical moment. Instruct Mr. [Lochner] and those of Mr. Ford’s directing committee, whom you know or not know, that you advise and wish them to take me into their counsel in deliberating methods of proceeding and actions. This is all I want! I do not aspire to be put forward or named in public. I only want the right to help, which I know I can. Your advice and wish is able to open that way -- which is now barred.

I am going back to Europe by Tuesday’s steamer to Holland, so your letter ought to go by the very next mail to Holland to the hands of the Committee, the address of which will surely be in your reach, but if not, your letter surely reaches its destination through Dr. [blank space]. I would greatly thank you to address to me personally, some lines about what you will do in this matter under the address of [blank space].

Only one word more I wish to add. I advise and entreat you to sustain and propose that out of American women gone over with Mr. Ford, a small special Committee be formed for the purpose of the work [for] Conciliation and Comprehension between the warring nations which has to start immediately [after the] war and has to be prepared now -- even [can] be inaugurated now. A nucleus of [illegible] of neutral women is needed around which to group women of the belligerent countries, thus forming a body which was to go from one of the hostile nations to the other and collect the forces of the untold pains and sorrows of the women in all these countries into a strong power against a recurrence of such things.

This is a most important work women have to do immediately after the war, and which has to be prepared now. We can form a wall from the [blank space] of the bereaved women in all these countries -- a war to protect the children of the new generations but it must be done immediately after the [war] and prepared before.

I beg you to think over this idea and to win Mr. Ford’s assistance for this special mission and make him devote financial help to this matter. It might already have been financed with half of the money spent on the mere external appearance of a special steamer and the taking abroad of such a great number, where no direct [way] can help the cause further. Ford can still win undying fame and merit if he directs his devotion and will of sacrifice into such creative [page 3] channels. Will you try to help the realization of it?

Trusting and relying that you feel the spirit which dictated my letter and do not misinterpret the purity of my intention. I express my deep veneration and my trust that you will help me in my efforts in the way I suggest.