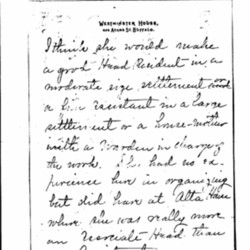 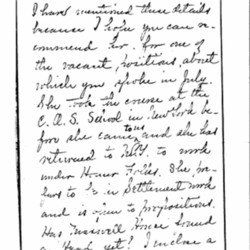 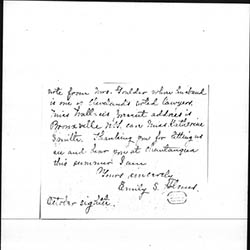 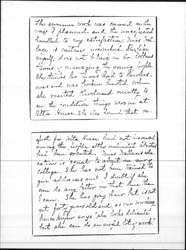 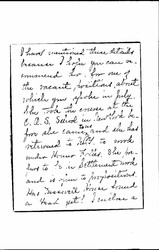 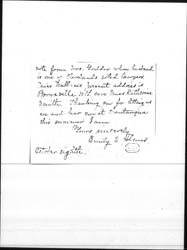 Do you remember my speaking to you at Chautauqua, about Miss Marion Wallace former assistant of Alta House? I told you she was to take my place while I was off duty and I would give you the results of the experiment. She [page 2] came as planned and took charge of our Settlement for six weeks. She certainly gained everybody's love, the old and young of the neighborhood, all the residents, the people who serve us and the few up town people whom she met. The residence was never in better order nor the public rooms, [although] she had to deal with a drunken janitor and poor work women. [page 3] The summer work was carried on the way I planned and the unexpected handled to my satisfaction. Miss Wallace is [greatness] personified. She, like myself, does not believe in Dr. Robbins theories of managing the young people. She thinks her [illegible] had to be lawlessness and was broken hearted when she visited Cleveland recently to see the conditions things were in at Alta House. She also found that [page 4] respect for Alta House had not increased among the people [although] unlimited liberties had been granted. Miss Wallace's education is equal to about one year of college. She has not been trained to give addresses and I doubt if she can do any better in that line that I can. She has grey hair but is not yet forty years old and as our working housekeeper says "she looks delicate but she can do an awful lot of work." [page 5]  I think she would make a good Head Resident in a moderate size settlement and ↑or↓ a fine assistant in a large settlement or a house-mother with a warden in charge of the work. She had no experience here in organizing but did have at Alta House where she was really more an Associate Head than an Assistant. [page 6]

I have mentioned these details because I hope you can recommend her for one of the vacant positions about which you spoke in July. She took the course at the C. O. S. School in New York before she came ↑to us↓ and she has returned to N. Y. to work under Homer Folks. She prefers to be in Settlement work and is open to propositions. Has Maxwell House found a Head yet? I enclose a [page 7] note from Mrs. Goulder whose husband is one of Cleveland's noted lawyers. Miss Wallace's present address is Bronxville, N. Y. care Miss Katherine Smith. Thanking you for letting us see and hear you at Chautauqua this summer I am 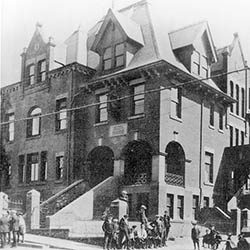 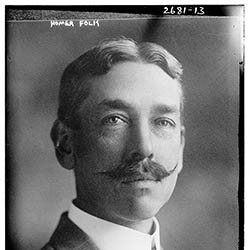 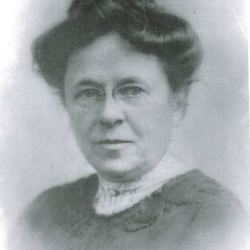 Holmes seeks assistance from Addams in securing a position for Marion Wallace at a settlement house.