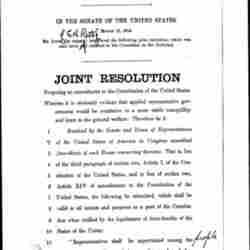 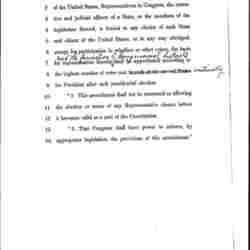 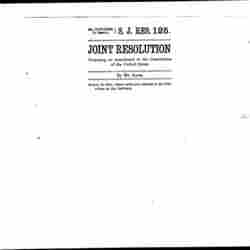 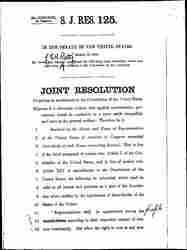 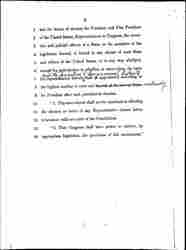 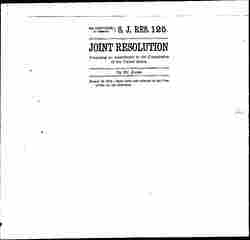 Mr. JONES (by request <of E. H. Rettig>) introduced the following joint resolution; which was read twice and referred to the Committee on the Judiciary.

JOINT RESOLUTION
Proposing an amendment to the Constitution of the United States.
Whereas it is obviously evident that applied representative government would be conducive to a more stable tranquility and inure to the general welfare: Therefore be it

"Representatives shall be apportioned among the several States according to their respective number of electors vocationally. But when the right to vote at any election [page 2] for choice of electors for President and Vice President of the United States, Representatives in Congress, the executive and judicial officers of a State, or the members of the legislature thereof, is denied to any elector of such State and citizen of the United States, or in any way abridged, except for participation in rebellion or other crime, the basis for representation therein shall be apportioned according to the highest number of votes cast in each of the several States for President after each presidential election.

"2. This amendment shall not be construed as affecting the election or terms of any Representative chosen before it becomes valid as a part of the Constitution.

"3. That Congress shall have power to enforce, by appropriate legislation, the provisions of this amendment."  [page 3]

JOINT RESOLUTION
Proposing an amendment to the Constitution of the United States.
By Mr. Jones.
March 12, 1914. - Read twice and referred to the Committee on the Judiciary.

Jones proposes a joint resolution (at the request of Herman Rettig) to the 63rd Congress which, if accepted, would result in an amendment to the Constitution allowing representatives to be apportioned to the people on a vocational basis.