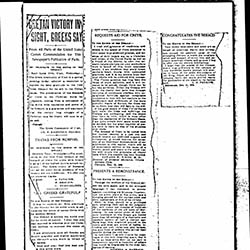 Panagiolis Kassinikos was a Greek physician who emigrated to the United States. He lived in Boston, MA before moving to Sal Lake City in 1906. He became the president of the Greek Community in the region, a member of the board of the Greek Orthodox Church, and the editor of a newsletter, The Light, published by the community.