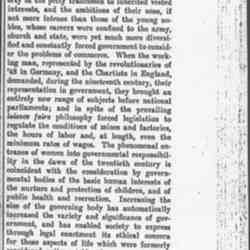 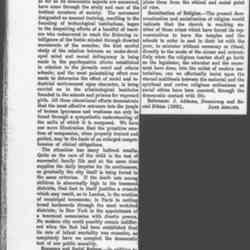 DEMOCRACY AND SOCIAL ETHICS. The belief that the social value of our ethical code bears a definite relation to the areas of its base, is but one part of the creed of democracy, whose foundation and guarantees are laid in diversified experience, with the resultant understanding of human life.

Democracy and Human Interests. -- As the governing class has been increased by the enfranchisement of one body of men after another, the art of government has been enriched in interests and has been humanized in proportion to its democratization. When the middle class broke into government during the eighteenth century, they at least added the property of the petty tradesmen to inherited vested interests, and the ambitions of their sons, if not more intense than those of the young nobles, whose careers were confined to the army, church and state, were yet much more diversified and constantly forced government to consider the problems of commerce. When the Working man represented by the revolutionaries of '48 in Germany, and the Chartists in England, demanded, during the nineteenth century, their representation in government, they brought an entirely new range of subjects before national parliaments; and in spite of the prevailing laissez faire philosophy forced legislation to regulate the conditions of mines and factories, the hours of labor and, at length, even the minimum rates of wages. The phenomenal entrance of women into governmental responsibility in the dawn of the twentieth century is coincident with the consideration by governmental bodies of the basic human interests of the nurture and protection of children, and of public health and recreation. Increasing the size of the governing body has automatically increased the variety and significance of government, and has enabled society to express though legal enactment its ethical concern for those aspects of life which were formerly considered quite outside of governmental control. When all the people become part of the governing class there inevitably arise a strong sense of collective responsibility, and a keen desire to use the common resources and organizations of the community for the supplying of public needs.

Daily Experience and Social Justice. -- But self-government, though one of the great instruments [page 2] in the hands of men who crave social justice, must ever be built up anew in relation to daily experience, or it may, like other instruments, be turned to base uses. Fortunately this power of renewing the ethical impulses, of discovering the needs of the people for relief and guidance, manifested in many directions.

The great modern discoveries in education, so far as its democratic aspects are concerned, have come through the study and care of the feeblest members of society. The movement designated as manual training, resulting in the founding of technological institutions, began in the despairing efforts of a handful of teachers who endeavored to reach the flickering intelligence of the feeble minded through directed movements of the muscles; the first careful study of the relation between an under-developed mind and moral delinquency is being made in the psychopathic clinics established in relation to the juvenile court and reform schools; and the most painstaking effort ever made to determine the effect of social and industrial environment upon character, is being carried on in the criminological institutes founded in the schools and prisons for wayward girls. All these educational efforts demonstrate that the most effective entrance into the jungle of human ignorance and weakness can only be found through a sympathetic understanding of the units of which it is composed. We have one more illustration that the primitive emotion of compassion, when properly trained and guided, may be the basis of an enlarged comprehension of ethical obligations.

The situation has many indirect results. Quite as the care of the child is the test of successful family life and at the same time supplies the daily impulse for its continuance, so gradually the city itself is being forced to the same criterion. If the death rate among children is abnormally high in the tenement districts, that fact in itself justifies a crusade which may result, as in London, in the erection of municipal tenements; in Paris in cutting broad boulevards through the most wretched districts; in New York in the appointment of a tenement commission with drastic powers. No modern city could possibly remain indifferent when the fact had been established that its rate of infant mortality was excessive, so completely have we accepted the democratic test of our public morality.

Economy and Social Reform. -- In addition to the social ethics embodied in government and in education, we find that the economists who first considered only wealth, are groping their way from the darkness of the nineteenth century which looked upon the nation as an agglomeration of selfish men, moved by self-interest, to a moral revolt against the squalid aspects of life. As a result of this contract a leading American economist has formulated a program of social reform founded upon the ascertained needs of young children, casual laborers and the unemployed. Such a program could not have been formulated by a scientist who had studied life conditioned only by economic forces but must have been enunciated by one convinced of the permanent dignity of human existence. It is as if the men most exclusively devoted to the analysis of economic conditions had bene fairly driven to contemplate them from the ethical and social of view.

Socialization of Religion. -- The present democratization and socialization of religion would indicate that the church is reaching another of those crises which have forced its representatives to leave the temples and the schools in order to cast in their lot with the poor, to minister without ceremony or ritual, directly to the needs of the sinner and outcast. Only when the religious teacher shall go forth as the legislator, the educator and the economist have done, into the midst of modern materialism, can we effectually insist upon the eternal antithesis between the material and the spiritual and revive religious enthusiasm as social ethics have been renewed, through the democratic contact with life.

Addams argues that it is the responsibility of a democracy to care about the social needs of its citizens.