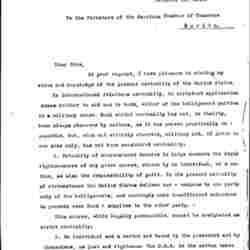 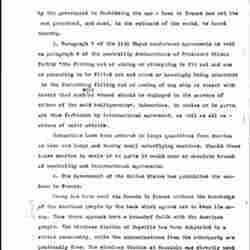 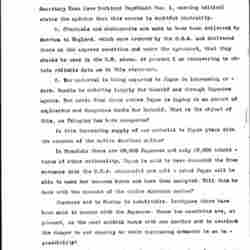 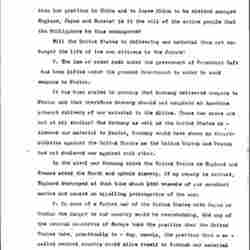 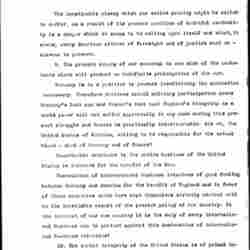 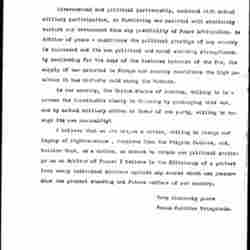 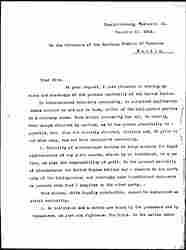 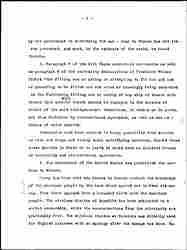 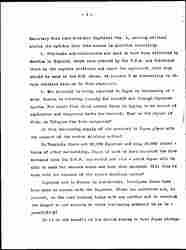 To the Directors of the American Chamber of Commerce

At your request, I have pleasure in stating my views and knowledge of the present neutrality of the United States.

In international relations neutrality, in strictest application means neither to aid nor to harm, either of the belligerent parties in a military sense. Such strict neutrality has not, in reality, been always observed by nations, as it has proven practically impossible, but, when not strictly observed, military aid, if given to one side only, has not been considered neutrality.

1. Actuality of circumstance decides in large measure the legal righteousness of any given course, chosen by an individual, or a nation, as also the responsibility of guilt. In the present actuality of circumstance the United States deliver war-weapons to one party only of the belligerents, and seemingly make insufficient endeavor to provide even food-supplies to the other party.--

This course, while legally permissible, cannot be designated as strict neutrality.

2. An individual and a nation are bound by the precedent set by themselves, as just and righteous. The U.S.A. in the action taken [page 2] by the government in forbidding the war-loan to France has set its own precedent, and must, in the estimate of the world, be bound thereby.

3. Paragraph 7 of the 11th Hague conference agreements as well as paragraph 8 of the neutrality declarations of President Wilson forbid "the fitting out or arming or attempting to fit out and arm or procuring to be fitted out and armed or knowingly being concerned in the furnishing fitting out or arming of any ship or vessel with intent that such <ship> or vessel should be employed in the service of either of the said belligerents." Submarines, in wholes or in parts, are thus forbidden by international agreement, as well as all machines of water aviatik.

Submarines have been ordered in large quantities from America as also one large and twenty small waterflying machines. Should these leave America in whole or in parts it would mean an absolute breach of neutrality and international agreements.

4. The Government of the United States has prohibited the war loan to France.

Money has been sent via Canada to France without the knowledge of the American people by the bank which agreed not to lend its money. Thus there appears here a breach of faith with the American people. The wireless Station of Sayville has been subjected to a strict censorship, while the communications from the other party are practically free. The wireless Station at Honolulu was directly used for English purposes with an apology after the damage was done. Ex. [page 3] Secretary Knox (see Berliner Tageblatt Dec. 1, morning edition) states the opinion that this course is doubtful neutrality.

5. Chemicals and medicaments are said to have been delivered by America to England, which were ordered by the U.S.A. and delivered there on the express condition and under the agreement, that they should be used in the U.S. alone. At present I am endeavoring to obtain reliable data as to this statement.

6. War material is being exported to Japan in increasing orders. Russia is ordering largely for herself and through Japanese agents. But aside from these orders Japan is laying in an amount of explosives and dangerous bombs for herself. What is the object of this, as Tsingtau has been conquered?

Is this increasing supply of war material to Japan given with the consent of the entire American nation?

In Honolulu there are 80,000 Japanese and only 20,000 inhabitants of other nationality. Japan is said to have demanded the free entrance into the U.S.A. successful and well-armed Japan will be able to make her demands known and have them accepted. Will this be done with the consent of the entire American nation?

Japanese aid to Mexico is indubitable. Intrigues there have been made in common with the Japanese. These two countries are, at present, on the most cordial terms with one another and to overlook the danger to our country in their increasing armament is an impossibility!

Is it to the benefit of the United States to have Japan strengthen [page 4] her position in China and to leave China to be divided amongst England, Japan and Russia? Is it the will of the entire people that the Philippines be this endangered?

Will the United States in delivering war material thus not endanger the life of its own citizens in the future?

7. The law or order made under the government of President Taft has been lifted under the present Government in order to send weapons to Mexico.

In the civil war Germany aided the United States as England and France aided the South and upheld slavery. If my memory is correct, England destroyed at that time about 1500 vessels of our merchant marine and caused an appalling prolongation of the war.

The inestimable misery which our entire country might be called to suffer, as a result of its present position of doubtful neutrality is a danger which it seems to be calling upon itself and which, it seems, every American citizen of foresight and of justice must endeavor to prevent.

9. The present supply of war material to one side of the combatants alone will produce an indefinite prolongation of the war.

Germany is in a position to produce indefinitely the ammunition necessary. Therefore Americas actual military participation means Germany's last man and France's last man! England's integrity as a world power will not suffer appreciably in any case during this present struggle and Russia is practically indestructible. Are we, the United States of America, willing to be responsible for the actual [bloodshed] of Germany and of France?

Inestimable detriment to the entire business of the United States is incurred for the benefit of the few.

10. The strict integrity of the United States is of primal importance to its own interest. [page 6]

Governmental and political partisanship, combined with actual military participation, in furnishing war material will absolutely exclude our Government from any possibility of Peace Arbitration. As Arbiter of peace -- conditions the political prestige of any country is increased and its own political and moral standing strengthened. By continuing for the sake of the business interest of the Few, the supply of war material to Europe our country sacrifices the high position it has hitherto held among the Nations.

Is our country, the United States of America, willing to increase the inestimable misery to Humanity by prolonging this war, and by actual military action in favor of one party, willing to resign its own neutrality?

I believe that we are not, as a nation, willing to resign our legacy of righteousness, received from the Pilgrim fathers, and, believe that, as a nation, we desire to retain our political prestige as an Arbiter of Peace! I believe in the Efficiency of a protest from every individual American against any course which can jeopardize the present standing and future welfare of our country. Pringsheim argues that trade practices of the United States in the early years of World War I have not been neutral.