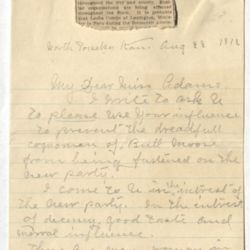 Blanche Boies was a dressmaker and radical activist for temperance and morality. Boies was well known in the Kansas area for her association with Carrie Nation and her flamboyant opposition to what she considered immoral behavior. In 1902 she attracted attention by horsewhiping Mayor Parker of Topeka to force him to enforce temepernce laws. Between 1903-1904 she was arrested multiple times for smashing saloon windows, liquor company offices, as well as axing a painting of General Custer in the Kansas State Historical Society because it had been donated by a brewery. She served a 220 day sentence in county jail for the last offense. In 1916 she was accused of defacing theater posters. Boies was also associated with anti-Catholic publications, the Menace, and the Torch.