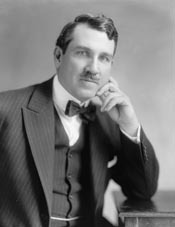 Timothy Thomas Ansberry attended the University of Notre Dame and began work as a lawyer after. From 1893 to 1895 he served as Justice of the Peace, and from 1895 to 1903 he was the prosecuting attorney of Defiance County. He was elected to the Sixtieth Congress as a Democrat, and served from 1907 to 1915 before resigning to accept a position as associate judge of the Ohio Court of Appeals. During the Sixty-second Congress, Ansberry served as chairman of the Committee on Elections No. 1. In 1916 he resigned as judge and moved to Washington D.C., practicing law for the remainder of his life. In 1920 and 1924, Ansberry was a delegate to the Democratic National Convention, and he was also a member of the Advisory Board of the American Bureau of Personal and Vocational Psychology.

Ansberry married Mary E. Kettenring in 1899. They had one child together. Ansberry died in 1943.

Picture from U.S. House of Representatives