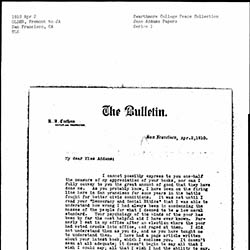 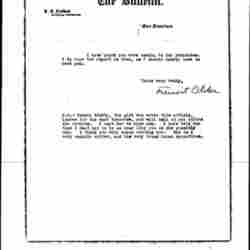 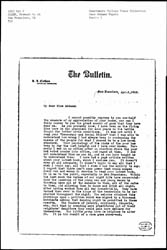 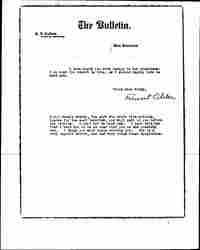 I cannot possibly express to you one-half the measure of my appreciation of your books, nor can I fully convey to you the great amount of good that they have done me. As you probably know, I have been on the firing line here in San Francisco for some years in the battle fought for better civic conditions. It was not until I read your "Democracy and Social Ethics" that I was able to understand how wrong I had always been in condemning the masses of the people for what I deemed to be a low moral standard. Your psychology of the minds of the poor has been by far the most helpful aid I have ever known. Formerly I sat in my office after an election where the poor had voted crooks into office, and raged at them. I did not understand them as you do, and as you have taught me to understand them. I have had a page article written about your latest book, which I enclose you. It doesn't seem at all adequate; it doesn't begin to say all that I wish I could say; all that I wish I had the ability to say. I regret that there isn't some power that could compel every man and woman in America to read your latest book. It is so to the point, especially in San Francisco. Within the last week the barons of our night life have commercialized the passions of the young men and young women by throwing open all of the saloons to them, all of the cafes to them, all of the cafes to them, and allowing them to dance and drink all night. After having worked them all day industrially, they have turned them over to the kings of the tenderloin to be exploited throughout the night. The saloons obtained this privilege upon a petition which was signed by a thousand merchants asking that dancing might be permitted in these resorts. The [vendors] of jewelry, millinery, lingerie, etc. felt that by creating more prostitutes out of their neighbors' daughters they could gain more dollars for themselves. Our little group here is helpless to alter it. It is the result of a race gone money-mad. [page 2]

I have heard you were coming to San Francisco. I do hope the report is true, as I should dearly love to meet you.

P.S.- Bessie Beatty, the girl who wrote this article, leaves for the east tomorrow, and will call on you before she returns. I want her to know you. I have told her that I want her to be as near like you as she possibly can. I think you will enjoy meeting her. She is a very capable writer, and has very broad human sympathies. 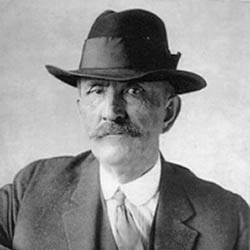 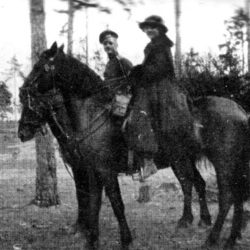 Fremont Older writes a letter to Jane Addams about her book, Democracy and Social Ethics, and how it relates to the current situation in San Francisco.

The article enclosed in this letter could not be found.