Freedom of Speech and Opinion a Crime, April 1920 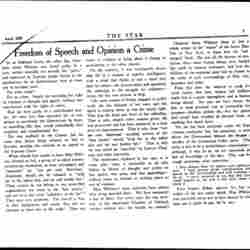 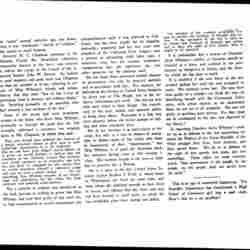 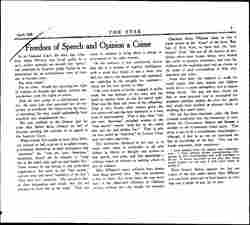 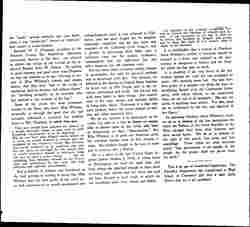 Freedom of Speech and Opinion a Crime

In an Oakland Court, the other day, Charlotte Anita Whitney was found guilty by a jury, neither mentally nor morally her "peers," and sentenced by Superior Judge Quinn to the penitentiary for an indeterminate term of from one to fourteen years.

For no crime. Simply for exercising her right of freedom of thought and speech, without any interference with the rights of others.

Had she been guilty of a cold-blooded murder, the same jury that convicted her of conspiracy to overthrow the Government by force, or something like that, would undoubtedly have acquitted and complimented her.

She was confined in the County Jail for some days before being released on bail of $10,000, pending the outcome of an appeal to the Supreme Court.

When friends first sought to have Miss Whitney released on bail, a group of so-called women, proclaiming themselves, as some newspapers and "statesmen" do, "100 [percent] American," threatened, should she be released, to "strip her to the naked skin, and tar and feather her." These women do not belong to any proscribed organization, but move in the "best society," and are strict and stern "upholders of the law"! They were very moderate. The marvel is that, in their indignation and wrath, they did not threaten to burn her at the stake! That was [page 2, column 1] the "mode" several centuries ago, you know, when it was "witchcraft," instead of "sedition," that caused so much hysteria.

Attorney M. C. Chapman, president of the Alameda County Bar Association (therefore presumably learned in the law), was selected to deliver the eulogy at the funeral of the lamented Senator John W. Stetson. So lacking in good manners and good sense was Chapman on that sad occasion as to say, referring to certain of Miss Whitney's friends and sympathizers, that they were "lost to the virtue of patriotism, dead to decency, and without shame," for "lavishing sympathy on an anarchist who had received a just sentence of the law."

Some of the truest and most prominent women in the State, who knew Miss Whitney, personally or through the good that she had wrought, addressed a courteous but stinging letter to Mr. Chapman, in which they said:

That you should have selected the funeral of a deeply mourned citizen to give vent to such hysterical vituperation is to be deplored.…Did we not have your alleged words before us in print, we would hesitate to believe that the president of the Alameda County Bar Association would condemn as an anarchist one who has not been so adjudged by the courts -- that he would constitute himself a voluntary judge and jury on such a grave charge.…We are defending Miss Whitney because of our knowledge and admiration for her clean life, high purposes and splendid achievements.

Not a scintilla of evidence was introduced at the trial, proving or tending to prove that Miss Whitney had ever been guilty of any overt act, or had countenanced or would countenance any [page 1, column 2] resort to violence to bring about a change in government or for other reasons.

On the contrary, it was conclusively shown that she is a woman of superior intelligence, with a mind that thinks of and a heart that feels for others -- the downtrodden and oppressed, the underdog in the struggle for existence -- whom she has ever striven to help.

Like most women of brains, engaged in public work, she has opinions of her own, and has dared to express them, as was her sacred right. That was the head and front of her offending. That is why, despite other reasons given, she was prosecuted and has been sentenced to a long term of imprisonment. That is why those "100 [percent] American" so-called women of the "best society" would "strip her to the naked skin and tar and feather her." That is why she was called an "anarchist" by Lawyer Chapman and other pay-triots.

The intolerance displayed in her case, as in many other cases, is intolerable to all who believe in liberty of thought and action -- in free speech, free press, and free assemblage -- without resort to violence or inciting others to acts of violence.

Miss Whitney's many activities have always been along peaceful lines. We here enumerate a few of them: For seven years she was secretary of the Associated Charities of Oakland, serving without pay; she fought for woman's [page 2, column 2] enfranchisement until it was achieved in California, and has since fought for its adoption nationally; organized and for two years was president of the California Civic League; was a pioneer in advocating child labor laws, a minimum wage law for women, workmen's compensation law, the eight-hour day, and other measures for the common weal.

She has many times advocated needed changes in government, but only by peaceful methods and in accordance with law. For instance, she believed in the election of United States Senators by direct vote of The People, and in the initiative, referendum and recall. She did not stop with mere belief in these things. She contributed of her time, money and splendid ability to bring them about. Fortunate it is that they were adopted, before the recent passage of sedition and other repressive laws.

We do not mention it as particularly to her credit, but only as a fact to shame -- if susceptible to shame -- some of her critics who boast so boisterously of their "Americanism," that Miss Whitney is of good old American stock, her ancestors having come to this country in 1640. Her forbears fought in the wars to make and to preserve this a Nation.

She is a niece of the late United States Supreme Justice Stephen J. Field, at whose home in Washington she lived for some time, and from whom she inherited enough to have lived in luxury and idleness had her heart and soul not been devoted to good work, to which she has unselfishly given time, energy and ability.

[page 1, column 3] Charlotte Anita Whitney chose to live a whole winter in the "slums" of the lower East Side of New York, to learn how the "submerged" lived. She saw all the horrors of conditions there -- how human beings were herded like cattle in noisome tenements, and how the children of the exploited poor had no chance in the midst of such surroundings of filth, vice, ignorance and crime.

From that time, she resolved to work for social justice, that men, women and children might live in a purer atmosphere, and as human beings should. She may not have chosen the best or most practical way to accomplish her purposes -- idealists seldom do, -- but her gentle soul would have revolted at physical force, or anything but moral force.

Yet she has been convicted under the State criminal syndicalist law, for conspiracy to overthrow the Government because she became a member of the Communist Labor Party. That party is said to be a revolutionary organization -- although, if that be so, we are convinced she had no knowledge of the fact. This was her simple statement, after conviction:

I have always been for justice and righteousness. I have always given conscientious allegiance to this Government and will continue to do so. It never occurred to me that this thing could happen to me and I still can't seem to grasp it.

Even Senator Kehoe, sponsor for, but not author of the law under which Miss Whitney was convicted, seems not to have known to what base uses it might be put, for he says:

It is unthinkable that a woman of Charlotte Anita Whitney's nobility of character should be branded as a felon, and confined in the penitentiary as dangerous to Society and the State, for which she has done so much.

It is doubtful if she ever heard of the law invoked against her until she was arraigned in court. We certainly never had. She may have been guilty of a mistake -- we think she was -- in identifying herself with the Communist Labor Party, with whose objects, as we understand them, we are out of all sympathy. She was not guilty of anything more serious. For that, must she be condemned by the law, and deprived of her liberty? 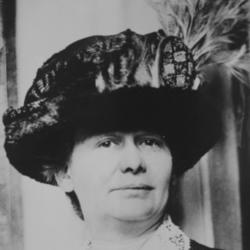 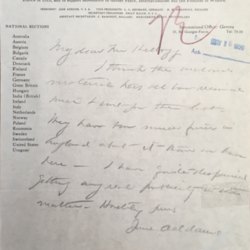 An article that criticizes the imprisonment of Charlotte Whitney on the grounds of free speech.