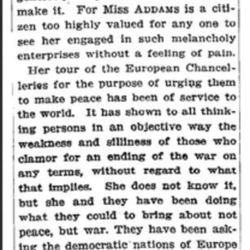 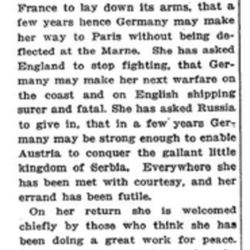 Every one will be glad to welcome Miss JANE ADDAMS back, and this includes those of her admirers and well-wishers who were sorry to see her go. These will hope that the next time there is to be a demonstration of the folly of those who think peace can be brought about by stopping a war it will fall to the lot of some one less generally respected than she is to make it. For Miss ADDAMS is a citizen too highly valued for any one to see her engaged in such melancholy enterprises without a feeling of pain.

Her tour of the European Chancelleries for the purpose of urging them to make peace has been of service to the world. It has shown to all thinking persons in an objective way the weakness and silliness of those who clamor for an ending of the war on any terms, without regard to what that implies. She does not know it, but she and they have been doing what they could to bring about not peace, but war. They have been asking the democratic nations of Europe to drop their arms and give Germany time to make the next attack, warned by this experience what mistakes to avoid and how to make the next onslaught more deadly and certain. They have asked, though they do not know it, for a truce in which each nation will work feverishly for the resumption of the battle on more terrible terms. Fortunately for the world, Germany in planning her attack [page 2] made certain great mistakes which went far to neutralize the effect of her great and fearful preparation for it. These mistakes she will not commit again if the nations she imperils give her, under the false name of “peace,” time and opportunity for the next assault upon the world.

All this Miss ADDAMS has presented in concrete form. For months we have seen her flitting from capital to capital, asking the nations to lay down their arms. She has asked France to lay down its arms, that a few years hence Germany may make her way to Paris without being deflected at the Marne. She has asked England to stop fighting, that Germany may make her next warfare on the coast and on English shipping surer and fatal. She has asked Russia to give in, that in a few years Germany may be strong enough to enable Austria to conquer the gallant little kingdom of Serbia. Everywhere she has been met with courtesy, and her errand has been futile.

On her return she is welcomed chiefly by those who think she has been doing a great work for peace. She has, in fact, been doing what she could for war, and not only for war, but for the ultimate downfall of democratic institutions in Europe and for the extinction of the “little peoples”; for more bloodshed, for more militarism, for the policy of conquest; for new Belgiums, more Serbias, for Lusitanias without end. It is well that the demonstration of the sad folly of peace-at-any-price should be given, but it is much to be regretted that it was JANE ADDAMS who gave it. 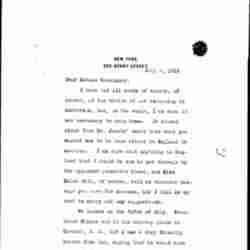 The New York Times criticizes the efforts of Addams and the International Congress of Women.