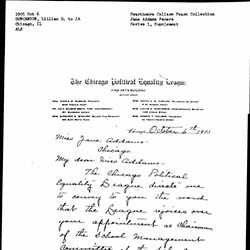 Lillian Duncanson grew up to become the corresponding secretary of the Chicago Political Equality League. She later served as president of the League. Duncanson was well-known within Chicago's clubs, and she worked to end examinations in schools and universities. She also composed some music, such as the song "Charming Kitty."