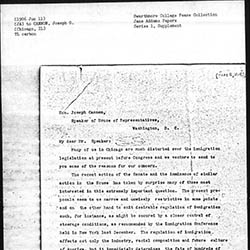 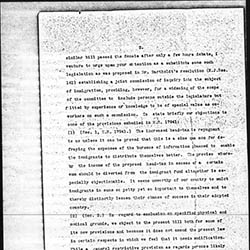 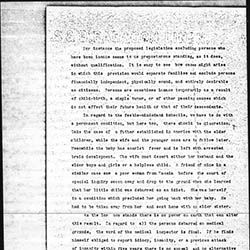 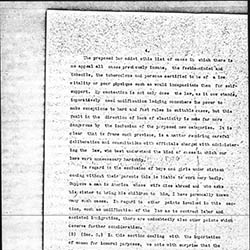 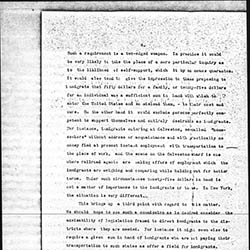 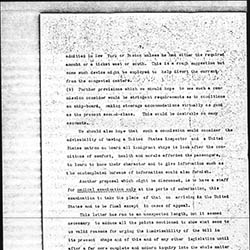 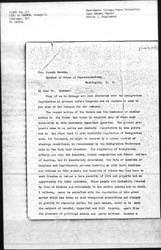 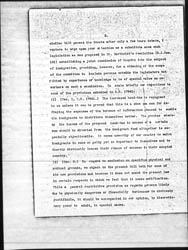 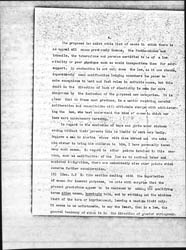 Many of us in Chicago are much disturbed over the immigration legislation at present before Congress and we venture to send to you some of the reasons for our concern.

The recent action of the Senate and the imminence of similar action in the House has taken by surprise many of those most interested in this extremely important question. The present proposals seem to us narrow and unwisely restrictive in some points and on the other hand to omit desirable regulation of immigration such, for instance, as might be secured by a closer control of steerage conditions, as recommended by the Immigration Conference held in New York last December. The regulation of immigration affects not only the industry, racial composition and future culture of America, but it immediately determines the fate of hundreds of helpless and inarticulate persons desiring to join their families and friends in this country and hundreds of others who come here to seek freedom or rather a bare security of life and property and an opportunity for their children. These people are intimately related by ties of kindred and friendship to the entire country and we shall, I believe, never be satisfied with the regulation of this great matter which has taken on such unexpected proportions and changed so greatly in character during the past decade, until it is made the subject of careful, impartial and full inquiry, apart from the pressure of political debate and party motives. Because a [page 2] similar bill passed the Senate after only a few hours debate, I venture to urge upon your attention as a substitute some such legislation as was proposed in Mr. Bartholdt's resolution (H.[R]. Res. 161) establishing a joint commission of inquiry into the subject of immigration, providing, however, for a widening of the scope of the committee to include persons outside the legislature but fitted by experience or knowledge to be of special value as [coworkers] on such a commission. To state briefly our objections to some of the provisions embodied in H.R. 17941:

(1)  (Sec. 1, H.R. 17941.) The increased head-tax is repugnant to us unless it can be proved that this is a sine qua non for defraying the expenses of the bureaus of information planned to enable the immigrants to distribute themselves better. The proviso whereby the income of the proposed head-tax in excess of a certain sum should be diverted from the immigrant fund altogether is especially objectionable. It seems unworthy of our country to mulct immigrants in sums so petty yet so important to themselves and to thereby distinctly lessen their chance of success in their adopted country.

(2)  (Sec. 2.) In regard to exclusion on specified physical and medical grounds, we object to the present bill both for some of its new provisions and because it does not amend the present law in certain respects in which we feel that it needs modification. While a general restrictive provision as regards persons likely to be physically dangerous or financially burdensome is obviously justifiable, it should be accompanied in our opinion, by discretionary power to admit, in special cases. [page 3]

For instance the proposed legislation excluding persons who have been insane seems to us preposterous standing, as it does, without qualification. It is easy to see how cases might arise in which this provision would separate families and exclude persons financially independent, physically sound, and entirely desirable as citizens.  Persons are sometimes insane temporarily as a result of child-birth, a simple tumor, or of other passing causes which do not affect their future health or that of their descendants.

In regard to the feeble-minded and imbecile, we have to do with a permanent condition, but here too, there should be discretion. Take the case of a father established in America with the elder children, while the wife and the younger ones are to follow later. Meanwhile the baby has scarlet fever and is left with arrested brain development. The wife must desert either her husband and the elder boys and girls or a helpless child. A friend of mine in a similar case saw a poor woman from Russia before the court of special inquiry swoon away and drop to the ground when she learned that her little child was debarred as an idiot.  She was herself in a condition which precluded her going back with her baby. He had to be taken away from her and sent home with an elder sister.

As the law now stands there is no power on earth that can alter this result. In regard to all the persons debarred on medical grounds, the word of the medical inspector is final. If he finds himself obliged to report idiocy, insanity, or a previous attack of insanity within five years there is no appeal and no alternative to deportation. Neither the Secretary of Commerce and Labor, nor the President of the United States nor any other person can interfere. [page 4]

The proposed law adds to this list of cases in which there is no appeal all cases previously insane, the feeble-minded and imbecile, the tuberculous and persons certified to be of a low vitality or poor physique such as would incapacitate them for self-support. My contention is not only does the law, as it now stands, imperatively need modification lodging somewhere the power to make exceptions to hard and fast rules in suitable cases, but this fault in the direction of lack of elasticity is made far more dangerous by the inclusion of the proposed new categories. It is clear that to frame such provisos, is a matter requiring careful deliberation and consultation with officials charged with administering the law, who best understand the kind of cases in which our laws work unnecessary hardship.

In regard to the exclusion of boys and girls under sixteen coming without their parents this is liable to work very badly. Suppose a man in America whose wife dies abroad and who asks his sister to bring his children to him, I have personally known many such cases. In regard to other points involved in this section, such as modification of the law as to contract labor and assisted immigration, there are undoubtedly also other points which deserve further consideration.

(3) (Sec. 3.) In this section dealing with the importation of women for immoral purposes, we note with surprise that the present provisions appear to be weakened by adding the qualifying terms alien women, knowingly held, and by striking out the minimum limit of the term of imprisonment, leaving a maximum limit only. It seems to us unfortunate, to say the least, that in a law, the general tendency of which is in the direction of greater stringency, [page 5] there should be a relaxation on this point.

(4) Section 12 requiring lists of passengers leaving the country is one we heartily desire to see carried out.

(5) (Sec. 20.) The effect of extending the time during which deportation is permissible for from two years to three is one on which the representatives of public and private charitable boards should be consulted at length. It is an important point. It might be wise to consider part of the immigrant fund if necessary, receipts from an increased tax as an insurance for the expensive return in case of necessity and to allow deportation at the expense of this fund at any time to any person with the proviso that such deportation were reimbursed. This would lessen our difficulties in times of depression, carrying home part of the unemployed, and would solve the difficulties of many of the stranded and unhappy persons who have proved misfits in this country, to the unspeakable benefit of themselves and the community. New York has long followed such a policy as a state and with excellent results.

(6) (Sec. 36.) It is to be considered whether the provisions of Section 36 could not advantageously be somewhat extended.

(7) (Sec. 38.) The illiteracy test does not seem to us a reasonable or a desirable one, but we have to admit that this subject has been largely discussed and will not here submit any further arguments. We do believe, however, that there are valid reasons against regarding it as a fair or useful test, which a commission such as is urged in this letter should and would consider.

(8) (Sec. 39.) In regard to the requirement of a fixed sum of money as a requisite for admission, we feel strongly opposed. [page 6] Such a requirement is a two-edged weapon. In practice it would be very likely to take the place of a more particular inquiry as to the [likelihood] of self-support, which it by no means [guarantees]. It would also tend to give the impression to those proposing to immigrate that fifty dollars for a family, or twenty-five dollars for an individual was a sufficient sum in hand with which to enter the United States and so mislead them,--to their cost and ours. On the other hand it would exclude persons perfectly competent to support themselves and entirely desirable as immigrants. For instance, immigrants entering at Galveston, so-called "home-seekers" without address or acquaintance and with practically no money find at present instant employment with transportation to the place of work, and the scene on the Galveston wharf is one where railroad agents are making offers of employment which the immigrants are weighing and comparing while holding out for better terms. Under such circumstances twenty-five dollars in hand is not a matter of importance to the immigrants or to us. In New York, the situation is very different.

This brings up a third point with regard to this matter. We should hope to see such a commission as is desired consider the advisability of legislation framed to direct immigrants to the districts where they are needed. For instance it might seem wise to require a given sum in hand of immigrants who are not paying their transportation to such states as offer a field for immigrants. Thus an immigrant might under proper circumstances be allowed to land without that sum in Texas, or in New York if he had a ticket through, let us say, to Colorado, while he would not be [page 7] admitted in New York or Boston unless he had either the required amount or a ticket west or south. This is a rough suggestion but some such device might be employed to help divert the current from the congested centers.

(9) Further provisions which we should hope to see such a commission consider would be stringent requirements as to conditions on ship-board, making steerage accommodations virtually as good as the present second-class. This would be desirable on many accounts.

We should also hope that such a commission would consider the advisability of having a United States inspector and a United States matron on board all immigrant ships to look after the conditions of comfort, health and morals afforded the passengers, to learn to know their character and to give information such as the contemplated bureaus of information would also furnish.

Another proposal which might be discussed, is to have a staff for medical examination only at the ports of [embarcation], this examination to take the place of that on arriving in the United States and to be final except in cases of appeal.

This letter has run to an unexpected length, but it seemed necessary to adduce all the points mentioned to show what seem to us valid reasons for urging the inadvisability of the bill in its present shape and of this and of any other legislation until after a far more complete and modern inquiry into the whole matter than has yet been made.

Feeling sure that you will accept our interest in this matter as an explanation of this letter, I am Addams proposes a substitution to a similar bill to the House of Representatives.