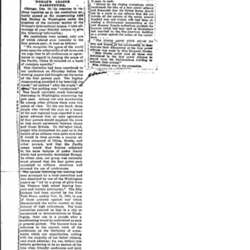 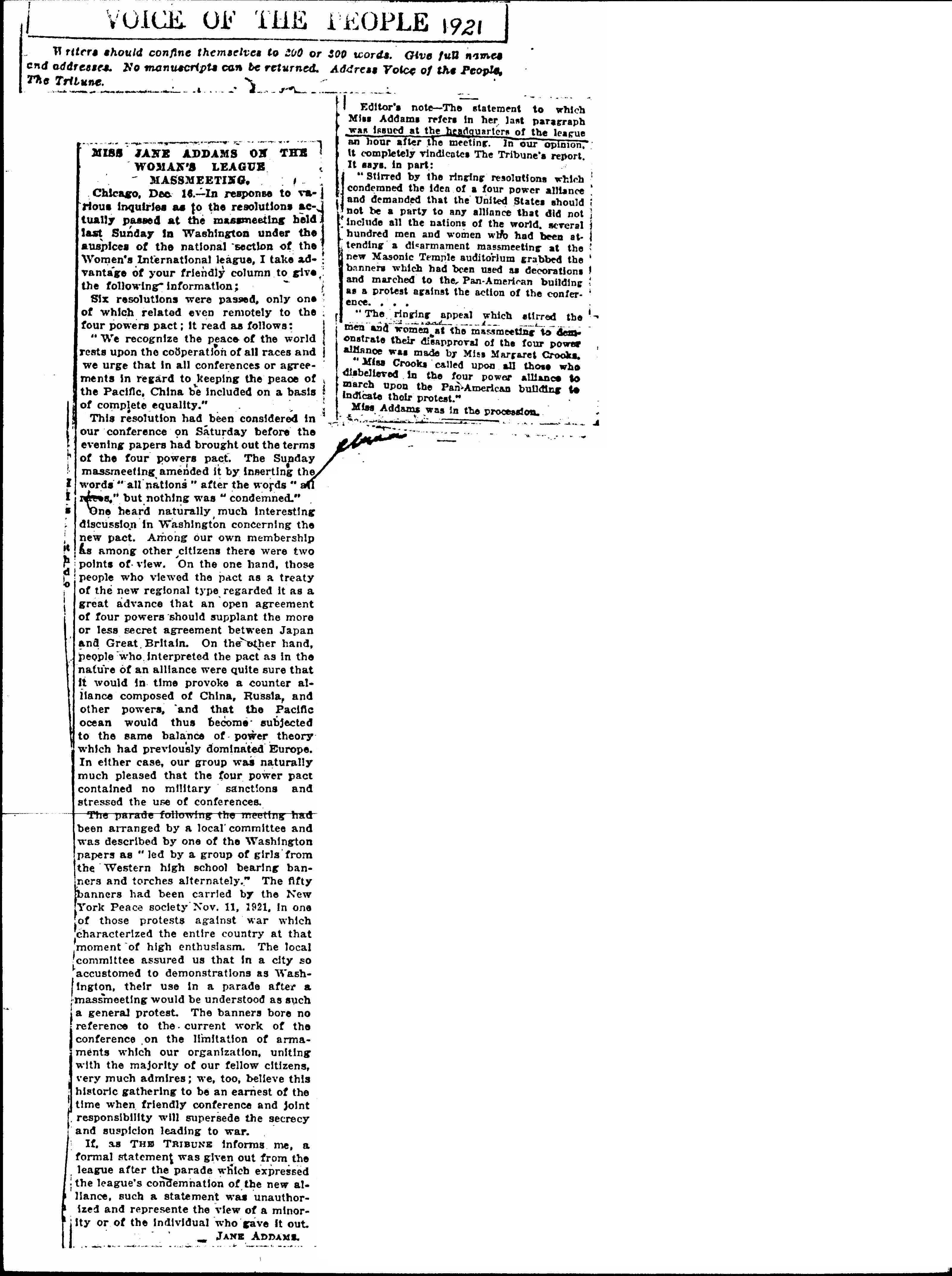 Chicago, Dec 16. -- In response to various inquiries as to the resolutions actually passed at the [mass meeting] held last Sunday in Washington under the auspices of the national section of the Women’s International league, I take advantage of your friendly column to give the following information:

Six resolutions were passed, only one of which related even remotely to the four powers pact; it read as follows:

“We recognize the peace of the world rests upon the cooperation of all races and we urge that in all conferences or agreements in regard to keeping the peace of the Pacific, China be included on a basis of complete equality.”

This resolution had been considered in our conference on Saturday before the evening papers had brought out the terms of the four powers pact. The Sunday [mass meeting] amended it by inserting the words "all nations" after the words "all races," but nothing was “condemned.” ↑[written in right margin] China↓

One heard naturally much interesting discussion in Washington concerning the new pact. Among our own membership as among other citizens there were two points of view. On the one hand, those people who viewed the pact as a treaty of the new regional type regarded it as a great advance that an open agreement of four powers should supplant the more or less secret agreement between Japan and Great Britain. On the other hand, people who interpreted the pact as in the nature of an alliance were quite sure that it would in time provoke a counter alliance composed of China, Russia, and other powers, and that the Pacific Ocean would thus become subjected to the same balance of power theory which had previously dominated Europe. In either case, our group was naturally much pleased that the four power pact contained no military sanctions and stressed the used of conferences.

The parade following the meeting had been arranged by a local committee and was described by one of the Washington papers as “led by a group of girls from the Western high school bearing banners and torches alternately.” The fifty banners had been carried by the New York Peace Society Nov. 11, 1921, in one of those protests against war which characterized the entire country at that moment of high enthusiasm. The local committee assured us that in a city so accustomed to demonstrations as Washington, their use in a parade after a [mass meeting] would be understood as such a general protest. The banners bore no reference to the current work of the conference on the limitation of armaments which our organization, uniting with the majority of our fellow citizens, very much admires; we, too, believe this historic gathering to be an earnest of the time when friendly conference and joint responsibility will supersede the secrecy and suspicion leading to war.

If, as THE TRIBUNE informs me, a formal statement was given out from the league after the parade which expressed the league’s condemnation of the new alliance, such a statement was unauthorized and [represented] the view of a minority or of the individual who gave it out.

Editor’s note--– The statement to which Miss Addams refers in her last paragraph was issued at the headquarters of the league an hour after the meeting. In our opinion, it completely vindicates The Tribune’s report. It says, in part:

“Stirred by the ringing resolutions which condemned the idea of a four power alliance and demanded that the United States should not be a party to any alliance that did not include all the nations of the world, several hundred men and women who had been attending a disarmament [mass meeting] at the new Masonic Temple auditorium grabbed the banners which had been used as decorations and marched to the Pan-American building as a protest against the action of the conference.

“The ringing appeal which stirred the men and women at the [mass meeting] to demonstrate their disapproval of the four power alliance was made by Miss Margaret Crooks.

“Miss Crooks called upon all those who disbelieved in the four power alliance to march upon the Pan-American building to indicate their protest.”

Miss Addams was in the procession.

Addams provides the Tribune with details of the resolutions passed at WILPF Mass Meeting and discusses the parade. The Tribune includes a quote from the statement that Addams argued was incorrect.