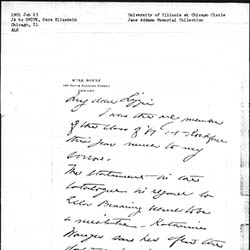 Sara Elizabeth Smith was the younger sister of Addie B. Smith and the daughter of Benjamin Franklin Smith and Annie M. Jordan Smith. She graduated Rockford College with Jane Addams in 1881. Smith was a very sociable person, often inviting many friends to her dorm and organizing illicit candy making or shopping trips. Part of the "Clique of '78." She also loved design, as she the drew floor plans of her room, served on committees in charge of decorating for events, and always writing about the latest fashion. Lizzie served as Vice President for the class of 1881 her sophomore year. After graduating, Smith took care of her invalid mother, and she worked as a genealogist and amateur historian. She attended library school courses at the University of Wisconsin and organized the De Pere Public Library. She was a member of the Wisconsin State Woman's Club and served as president of the De Pere Woman's Club branch. Smith was involved with her mother and sister in the local branch of DAR and worked as a filing clerk for the Brown County War Office during World War I.