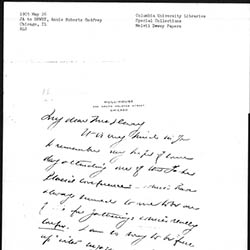 Melvil Dewey was the inventor of the Dewey Decimal System. He attended Alfred University and Amherst College, and while he was still a student he founded the Library Bureau, which sold index cards and filing cabinets to libraries. Dewey worked as Chief Librarian at Columbia University from 1883 to 1888. There he opened the School of Library Economy at Columbia College. He was the director of the New York State Library from 1888 to 1906, and during that time he established a program for traveling libraries. From 1888 to 1900, Dewey served as secretary and executive officer of the University of the State of New York, and in 1895 Dewey founded the Lake Placid Club with his wife. He also chaired the New York State Winter Olympics Committee and helped organize the 1932 Winter Olympics in Lake Placid.