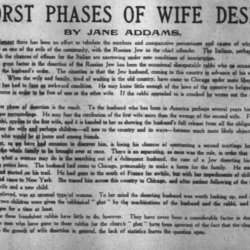 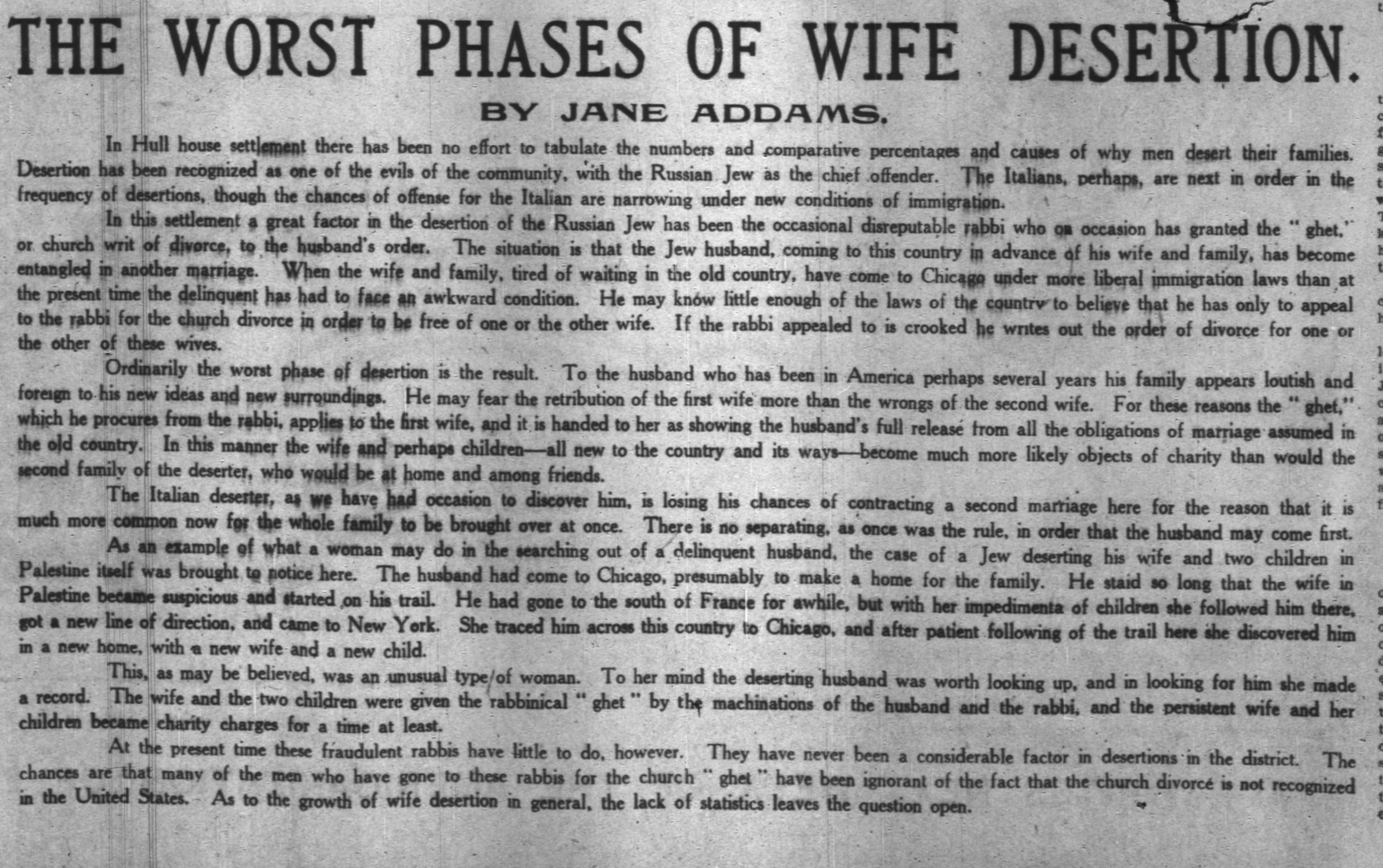 THE WORST PHASES OF WIFE DESERTION.

In Hull house settlement there has been no effort to tabulate the numbers and comparative percentages and causes of why men desert their families. Desertion has been recognized as one of the evils of the community, with the Russian Jew as the chief offender. The Italians, perhaps, are next in order in the frequency of desertions, though the chances of offense for the Italians are are narrowing under new conditions of immigration.

In this settlement a great factor in the desertion of the Russian Jew has been the occasional disreputable rabbi who on occasion has granted the "ghet," or church writ of divorce, to the husband's order. The situation is that the Jew husband, coming to this country in advance of his wife and family, has become entangled in another marriage. When the wife and family, tired of waiting in the old country, have come to Chicago under more liberal immigration laws than at the present time the delinquent has had to face an awkward condition. He may know little enough of the laws of the country to believe that he has only to appeal to the rabbi for the church divorce in order to be free of one or the other wife. If the rabbi appealed to is crooked he writes out the order of divorce for one or the other of these wives.

Ordinarily the worst phase of desertion is the result. To the husband who has been in America perhaps several years his family appears loutish and foreign to his new ideas and new surroundings. He may fear the retribution of the first wife more than the wrongs of the second wife. For these reasons the "ghet," which he procures from the rabbi, applies to the first wife, and it is handed to her as showing the husband's full release from all the obligations of marriage assumed in the old country. In this manner the wife and perhaps children -- all new to the country and its ways -- become much more likely objects of charity than would the second family of the deserter, who would be at home and among friends.

The Italian deserter, as we have had occasion to discover him, in losing his chances of contracting a second marriage here for the reason that it is much more common now for the whole family to be brought over at once. There is no separating, as once was the rule, in order that the husband may come first.

As an example of what a woman may do in the searching out of a delinquent husband, the case of a Jew deserting his wife and two children in Palestine itself was brought to notice here. The husband had come to Chicago, presumably to make a home for the family. He [stayed] so long that the wife in Palestine became suspicious and started on his trail. He had gone to the south of France for awhile, but with her impediments of children she followed him there, got a new line of direction, and came to New York. She traced him across this country to Chicago, and after patient following of the trail here she discovered him in a new home, with a new wife and a new child.

This, as may be believed, was an unusual type of woman. To her mind the deserting husband was worth looking up, and in looking for him she made a record. The wife and the two children were given the rabbinical "ghet" by the machinations of the husband and the rabbi, and the persistent wife and her children became charity charges for a time at least.

At the present time these fraudulent rabbis have little to do, however. They have never been a considerable factor in desertions in the district. The chances are that many of the men who have gone to these rabbis for the church "ghet" have been ignorant of the fact that the church divorce is not recognized in the United States. As to the growth of wife desertion in general, the lack of statistics leaves the question open.

Addams discusses the prevalence of wife desertion among Jewish and Italian men in the Hull-House neighborhood.