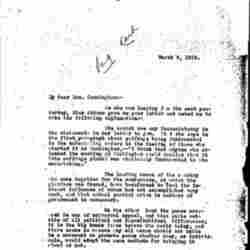 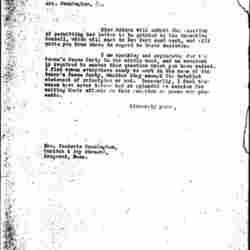 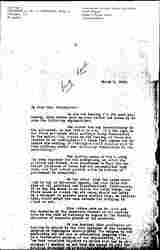 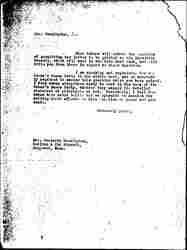 As she was leaving from the east yesterday, Miss Addams gave me your letter and asked me to make the following explanation: --

She cannot see any inconsistency in the statements in her letter to you. What she says in the first paragraph about suffrage being fundamental to the undertaking refers to the feeling of those who started it at Washington, -- "I think that anyone who attended the meeting at Washington would realize that it (the suffrage plank) was absolutely fundamental to the undertaking."

The leading women of the country who came together for the conference, at which the platform was framed, have been forced to feel the indirect influence of woman has not accomplished very much, and that actual participation in matters of government is necessary.

On the other hand the peace movement is one of universal appeal, and lies quite outside of all political and denominational differences; it is the big human issue before the world today, and there seems no reason why all women should not unite in a movement to promote peace whether they, as individuals, would adopt the same methods for bringing it about or not.

Miss Addams asks me to quote you the decision of the Executive Council at its meeting here on the 14th of February in regard to the binding character of separate planks of the platform.

It was decided: that particular attention be called to the last sentence of the Preamble adopted at Washington January 10th: "We welcome to our membership all who are in substantial sympathy with that fundamental purpose of our organization, (i.e. 'we band ourselves together to demand that war be abolished.') whether or not they can accept in full our detailed statement of principles." [page 2]

Miss Addams will submit the question of permitting her letter to be printed to the Executive Council, which will meet in New York next week, and will write you from there in regard to their decision.

I am speaking and organizing for the Woman's Peace Party in the middle west, and am constantly required to answer this question which you have raised. I find women everywhere ready to work in the name of the Women's Peace Party, whether they accept its detailed statement of principles or not. Personally, I feel that women have never before had so splendid an occasion for uniting their efforts as this question of peace now presents.

Addams defends her stance on suffrage in the Woman's Peace Party and a recent decision made by the Executive Council on allowing women to join without believing in suffrage.