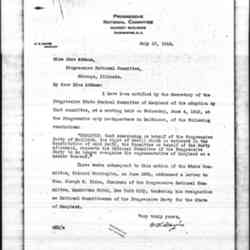 Edward C. Carrington, Sr. was a lawyer, businessman, and politician. He was privately educated and was admitted to the Maryland bar in 1894. Carrington started his own corporate law firm in Baltimore. He supported Roosevelt in the Republican Party's schism, but later advocated for the party's unification. Carrington was the campaign manager for Roosevelt during his 1912 primary run. He was also a member of the Progressive National Committee and Chairman of the Progressive State Committee. In 1914, he ran an unsuccessful U.S. Senate campaign. Carrington later served as the Hudson River Navigation Corporation's president.

Carrington married Ethel Stuart Coyle in 1899. The couple had three children together. Carrington died in 1938.