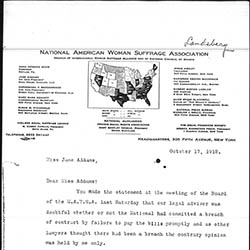 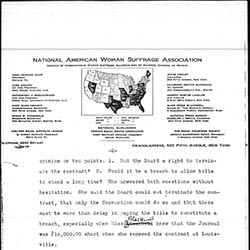 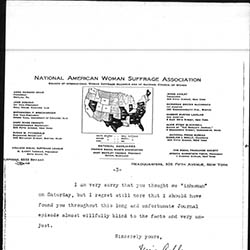 You made the statement at the meeting of the Board of the [N].A.W.S.A. last Saturday that our legal advisor was doubtful whether or not the National had committed a breach of contract by failure to pay the bills promptly and as other lawyers thought there had been a breach the contrary opinion was held by me only.

I wish to protest against the insinuation. It is not fair to Miss Towle, indeed it lays her open to the most severe criticism in her professional conduct. She has advised us, and to suggest that she has advised us against her own conviction -- or when in doubt -- is to suggest legal dishonesty. Miss Towle is not in doubt. She expresses herself cautiously so that we might fully understand all the questions that might be raised, but she has no doubt as to our position. When I consulted Miss Towle I did not express any opinion whatever. I gave her the constitution and a copy of the contract and asked her to read them carefully and to give me her [page 2] opinion on two points. 1. Had the Board a right to terminate the contract? 2. Would it be a breach to allow bills to stand a long time? She answered both questions without hesitation. She said the Board could not terminate the contract, that only the Convention could do so and that there must be more than delay in paying the bills to constitute a breach, especially when Miss Steckwell <Blackwell> knew that the Journal was $10,000.00 short when she renewed the contract at Louisville.

I then took the trouble to consult my brother who is an acknowledged authority on contracts. I did not tell him my opinion but asked his. It was the same as that expressed by Miss Towle.

I may say in passing that <if> is there is one subject in this world that I know a little about, it is contracts and my opinion would remain the same whether Miss Towle agreed with me or not, but I would of course in this case accept her decision and abide by it. Miss Towle is a careful lawyer and would never advise a client unless she were convinced that the position she took was sound. [page 3]

I am very sorry that you thought me "inhuman" on Saturday, but I regret still more that I should have found you throughout this long and unfortunate Journal episode almost willfully blind to the facts and very unjust. 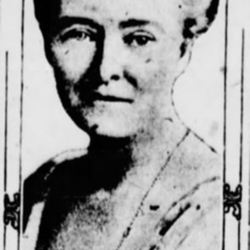 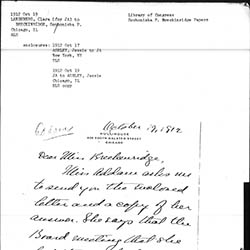 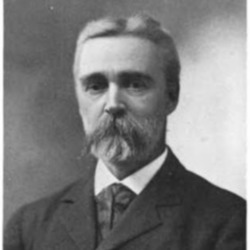 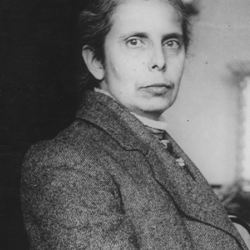 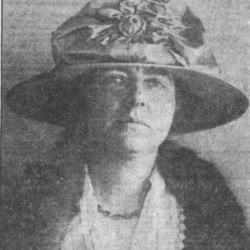 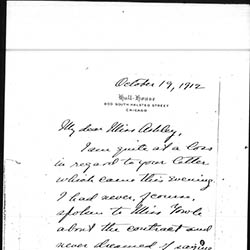 Ashley protests against Addams for making a statement attacking Mary Towle at a board meeting of the National American Woman Suffrage Association.