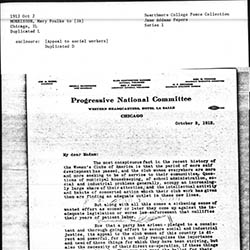 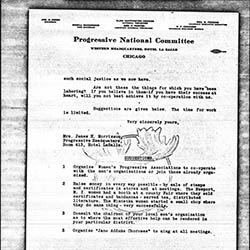 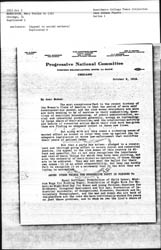 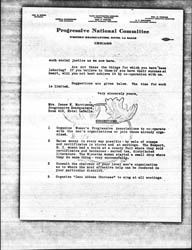 The most conspicuous fact in the recent history of the Women's Clubs of America is that the period of mere self development has passed, and the club women everywhere are more and more seeking to be of service to their communities. Questions of municipal housekeeping, of school administration, social and industrial problems generally, [occupy] an increasingly large share of their attention, and the intellectual activity and habits of concerted action which their club work has given them are finding an adequate outlet in these new lines.

But along with all this comes a sickening sense of wasted effort as sooner or later they come up against the inadequate legislation or worse law-enforcement that nullifies their years of patient labor.

Now that a party has arisen -- pledged to a consistent and thorough going effort to secure social and industrial justice, its appeal to the club women of this country is direct and powerful, for it not only recognizes the importance and need of these things for which they have been striving, but also the necessity of their direct [cooperation], if these things are to be achieved. They may not want the ballot for their own sakes -- it is an added responsibility, but they can hardly fail to recognize it as a necessary tool in the work they are trying to accomplish.

AMONG OTHER THINGS THE PROGRESSIVE PARTY IS PLEDGED To

Equal Suffrage; Prohibition of Child Labor; Minimum Wage for Working Women; Prohibition of Night Work for Women; An Eight Hour Day for Women and young Persons; Pensions for Sickness; Irregular Employment and Old Age; Prevention of Industrial Accidents; of Occupational Diseases; Overwork and Involuntary Unemployment, and the men and women who are back of the platform are the ones who have individually worked for years on just these problems, and to whom we owe the lion's share of [page 2] such social justice as we now have.

Are not these the things for which you have been laboring? If you believe in them -- if you have their success at heart, will you not best achieve it by [cooperation] with us.

Suggestions are given below. The time for work is limited.

1 Organize Women's Progressive Associations to [cooperate] with the men's organizations or join those already organized.

2 Raise money in every way possible -- by sale of stamps and certificates in stores and at meetings. The Newport, R.I. women had a booth at a county Fair where they sold certificates and [bandanas] -- served tea, distributed literature. The Winnetka women started a small shop where they do same thing -- very successfully.

3 Consult the chairmen of your local men's organization as to where the most effective help can be rendered in your particular district.

[4] Organize "Jane Addams Choruses" to sing at all meetings. 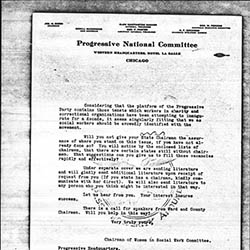