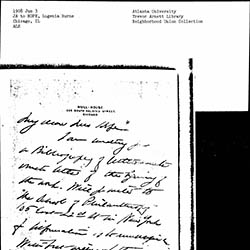 Lugenia Burns Hope attended the Chicago Art Institute, the Chicago School of Design (now the Art Institute of Chicago), and the Chicago Business College. She and her husband moved to Atlanta, where he worked at the Atlanta Baptist College (now Morehouse College). While there, she surveyed local residents' needs and helped create day care, kindergarten, and recreational programs at the college. In 1908, Hope founded the Neighborhood Union, which was the first woman-run social welfare agency for African Americans in Atlanta. Hope was the Director of the Board of Managers until 1936. During World War II, the Neighborhood Union hosted YWCA War Work Councils to provide entertainment to black soldiers; this led to Hope coordinating a US-wide network of Hostess Houses, which provided various programs for black and Jewish soldiers. Hope was also a founding member of the Atlanta branch of the National Association of Colored Women's Clubs, and she fought to end segregation within the YWCA. In addition, she served as vice president of the National Association for the Advancement of Colored People of Atlanta. She also worked for a time at Hull-House.