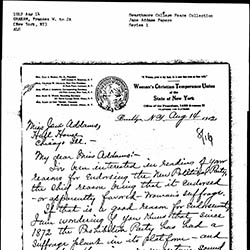 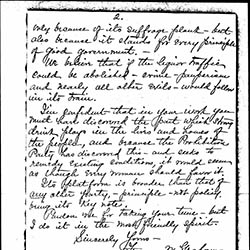 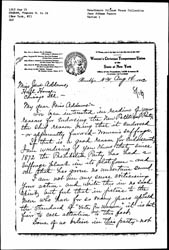 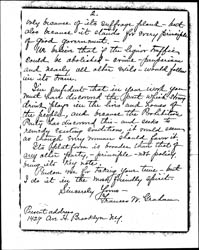 Woman's Christian Temperance Union
of the
State of New York

Office of the President, 1429 Avenue H

I've been interested in reading of your reasons for endorsing the New Political Party, the chief reason being that it endorsed -- or apparently favored -- woman's suffrage.

If that is a good reason for endorsement, I am wondering if you knew that since 1872 the Prohibition Party has had a suffrage plank in its platform -- and on that has given no uncertain sound.

I am not in any sense [criticizing] Your action, and write this in no such spirit, but feel that in justice to the men who have for so many years upheld the standard of "votes for women" it is but fair to call attention to this fact.

Some of us believe in this party -- not [page 2] only because of its suffrage plank -- but also because it stands for every principle of good government. --

We believe that if the liquor traffic could be abolished -- crime -- pauperism and nearly all other evils -- would follow in its train.

I'm confident that in your work you must have discovered the part which strong drink plays in the lives and homes of the people, and because the Prohibition Party has discovered this -- and seeks to remedy existing conditions, it would seem as though every woman should favor it.

It's platform is broader than that of any other party, -- principle -- not policy, being its key note.

Pardon me for taking your time -- but I do it in the most friendly spirit. 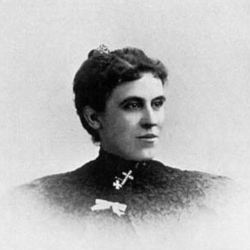 Graham questions Addams' support of the Progressive Party, arguing that the Prohibition Party has included woman suffrage on it's platform for decades.