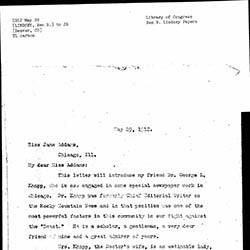 Eva Barbara Loehr Knapp was a trained musician and educator.
She was a music student in Chicago, where she subsequently taught before moving to Pueblo, Colorado. Once there, she taught music and eventually founded her own school. In 1908, after her marriage, Knapp returned to Chicago.

Knapp married George L. Knapp in 1907. The couple had a daughter, Barbara, and fostered a boy, Charles. Knapp died in 1937.