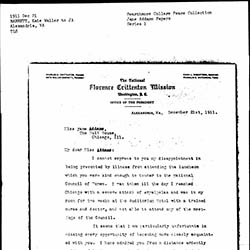 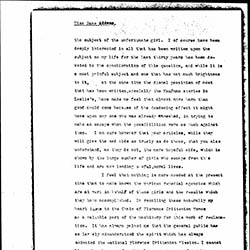 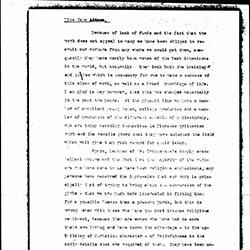 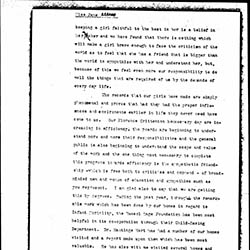 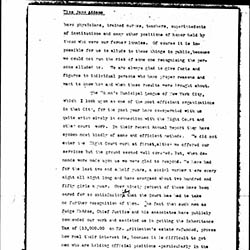 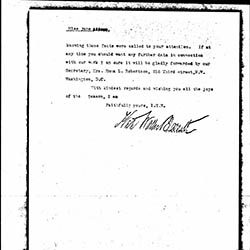 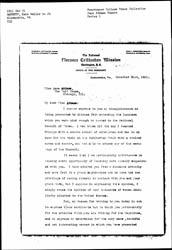 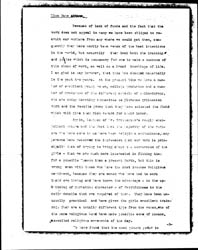 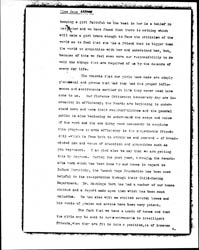 I cannot express to you my disappointment in being preventing by illness from attending the luncheon which you were kind enough to tender to the National Council of Women.  I was taken ill the day I reached Chicago with a severe attack of erysipelas and was in my room for two weeks at the Auditorium Hotel with a trained nurse and doctor, and not able to attend any of the meetings of the Council.

It seems that I am particularly unfortunate in missing every opportunity of becoming more closely acquainted with you.  I have admired you from a distance ardently and have felt it a great deprivation not to have had the privilege of coming closely in contact with you and your great work, but I suppose in expressing this opinion, I simply voice the opinion of many thousands of women similarly situated in the United States.

But, my reason for writing to you today is not to express these sentiments but to thank you particularly for the articles which you are writing for the magazines, and to express my admiration for the very sane, truthful and yet interesting manner in which you have presented [page 2] the subject of the unfortunate girl.  I of course have been deeply interested in all that has been written upon the subject as my life for the last thirty years has been devoted to the consideration of this question, and while it is a most painful subject and one that has not much brightness to it, at the same time the dismal pessimism of most that has been written, specially the [Kauffmann] stories in Leslie's, have made me feel that almost more harm than good could come because of the deadening effect it might have upon any one who was already enmeshed, in trying to make an escape when the possibilities were so much against them.  I am sure however that your articles, while they will give the sad side as [truly] as do these, that you also understand, as they do not, the more hopeful side, which is shown by the large number of girls who escape from this life and are now leading useful, moral lives.

I feel that nothing is more needed at the present time than to make known the various remedial agencies which are at work in behalf of these girls and the results which they have accomplished.  In recalling these naturally my heart turns to the Chain of Florence Crittenton Homes as a valuable part of the machinery for this work of reclamation.  It has always pained me that the general public has so largely misunderstood the spirit which has always animated the National Florence Crittenton Mission.  I cannot blame them however for this because so many of our homes and work in them, themselves have not a clear idea of the opportunities for which they responsible. [page 3]

Because of the lack of funds and the fact that the work does not appeal to many we have been obliged to recruit our workers from any where we could get them, conquently they have mostly been women of the best intentions in the world, but naturally they lack both the training and poise which is necessary for one to make a success of this class of work, as well as a broad knowledge of life.  I am glad to say however, that this has changed materially in the past two years.  At the present time we have a number of excellent young women, college graduates and a number of graduates of the different schools of philanthropy, who are today devoting themselves to Florence Crittenton work and the results prove that they have selected the field which will give them rich reward for their labor.

Again, because of Mr. Crittenton's deeply evangelical nature and the fact that the majority of the workers who have come to us have been religious enthusiasts, many persons have received the impression that our work is principally that of trying to bring about the conversion of the girls -– that we are much more interested in fitting them for a possible Heaven than a present Earth, but this is wrong even with those who have the most intense religious sentiment, because they are women who have had to earn their own living and have known the advantage -– to the upbuilding of Christian character -– of faithfulness to the daily details that are required of them.  They have been unusually practical and have given the girls excellent training.  They are a totally different type from the women, who of the same religious bend have made possible some of insane, so-called religious movements of the day.

We have found that the most potent power in  [page 4] keeping a girl faithful to the best in her is a belief in her Maker and we have found that there is nothing which will make a girl brave enough to face the criticism of the world as to feel that she has a friend that is bigger than the world to sympathize with her and understand her, but, because of this we feel even more our responsibility to do well things that are required of us by the demands of every day life.

The records that our girls have made are simply phenomenal and proves that had the proper influences and environments earlier in life they never need have come to us.  Our Florence Crittenton homes every day are increasing in efficiency; the Bcards are beginning to understand more and more their responsibilities and the general public is also beginning to understanding the scope and value of the work and the one thing most necessary to complete this progress towards efficiency is the sympathetic friendship –- which is free both to [criticize] and commend –- of broad minded men and women of education and sympathies such as you represent.  I am glad also to say that we are getting this be degrees.  During the past year, through the remarkable work which has been done by our homes in regard to Infant Morality, the Russel Sage Foundation has been helpful in its [cooperation] through their Child-Saving Department.  Dr. Hastings Hart has had a number of our homes visited and a report made upon them which has been most valuable.  He also with me visited several homes and his words of praise and advice have been very potent.

The fact that we have a Chain of homes and that the girls may be sent to new [environments] to intelligent friends, when they are fit to take a position, is of immense [page 5] importance.  When we send a girl to a new location we frequently do not send them to the Home at all but to the house of some member of the Board or else some boarding place that has been selected for us and she starts her new life without any association with the Home.

I have long since realized the fact that there is a reasonable ground for the attitude that society takes upon these subjects and I am convinced that it is a great deal better if a girl has a child to call herself "Mrs" and go into a new locality and begin life over again among strangers than it is to keep her where her history is known, even if we can successfully open to her economic independence and social regeneration as is sometimes possible, unless it is a very unusual case. I do not know any way that this can be done better than through our Chain of Homes.  If you can help us in any way to bring a correct knowledge of them to the attention of the general public I am sure we will appreciate and even more will we appreciate any criticism which you may pass upon our plan of work or method which will be constructive.

We have a number of scholarships, some endowed and some which we receive at specially low rates, for intelligent girls who was willing to give time to prepare themselves for some profession other than that of house or factory work. In placing our girls in these scholarships we use a great deal of care, selecting only such girls as we feel will repay the expenditure in their behalf as well as will bear themselves in such a manner that no one will know their past.  One of the most hopeful things in connection with this phase of our work is that we have never had one single case to prove unfaithful.  At the present time we [page 6] have physicians, trained nurses, teachers, superintendents of institutions and many other positions of honor held by these who were our former inmates.  Of course it is impossible for us to allude to these things in public, because we could not run the risk of some one recognizing the persons alluded to.  We are always glad to give facts and figures to individual persons who have proper reasons and want to know how and when these results were brought about.

The Woman's Municipal League of New York City, which I look upon as one of the most [efficient] organizations in that City, for the past year have cooperated with us quite extensively in connection with the Night Court and other court work.  In their recent Annual Report they have spoken most kindly of sane and efficient methods.  We did not enter the Night Court work at first, [although] we offered our services but the ground seemed well covered.  But, when demands were made upon us we were glad to respond.  We have had for the last two and a half years, a social worker there every night all night long and have averaged about two hundred and fifty girls a year.  Over ninety percent of these have been cared for so satisfactorily that the Court has had to take no further recognition of them.  The fact that such men as Judge McAdoo, Chief Justice and his associates have publicly commended our work and assisted us in getting the Inheritance Tax of $13,000.00 on Mr. Crittenton's estate refunded, proves how real their interest is, because it is difficult to get men who are holding official positions – particularly in the unsettled state of New York Politics – to undertake anything outside of necessities.

Please pardon me for sending this long letter but I felt that I could not let the opportunity pass without [page 7] knowing these facts were called to your attention.  If at any time you should want further data in connection with our work I am sure it will be gladly forwarded by our Secretary, Mrs. Emma L. Robertson, 218 Third Street, N.W. Washington, D.C.

With kindest regards and wishing you all the joys of the Season, I am Barrett thanks Addams for her articles about prostitution and explains the work of the Florence Crittenton Mission.