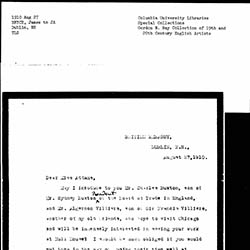 Francis Hyde Villiers was the son of George William Villiers, the 4th Earl of Clarendon. He attended the Harrow School, and in 1870 he entered the Foreign Office. He was appointed Acting Second Secretary in the Diplomatic Service in 1885 and served as Private Secretary to the Foreign Secretary, Lord Rosebery, in 1886 and from 1892 to 1894. In 1887 he was Acting Private Secretary to Lord Salisbury, and from 1896 to 1905 he was Assistant Under Secretary at the Foreign Office. In 1906, Villiers was appointed to be Minister to Portugal, and in 1911 he was Minister to Belgium. During World War I, Villiers remained with the Belgian Government, and after the war, when the British Legation at Brussels was raised to an Embassy, Villiers became an Ambassador. He received many honors in his life, including being knighted and being appointed to the Privy Council in 1919. In addition, the King of Portugal gave him the Grand Cross of the Order of Christ, and the King of Belgium gave him the Grand Cross of the Order of Leopold.

Villiers married Virginia Katharine Smith in 1876. They had five children together. Villiers died in 1925.