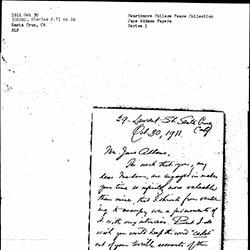 Charles Johnson Gedge was a professor and editor. He received his Master of the Arts degree from the University of Cambridge. He worked as a newspaper editor. Gedge was a member of the library board at the Bury Athenæum and the director of his branch of the West Suffolk Friendly Society, which was a major benefit organization. In 1876, he immigrated from England with his sister. They first went to Minnesota, but eventually moved to Santa Cruz, California. In both locations, Gedge taught as a college professor.