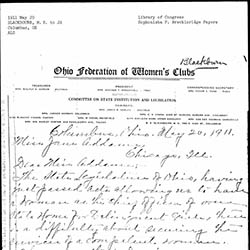 Marinda Emolyn Blackburn Weddel was a physician and charity worker. Blackburn was the first woman to graduate from the Ohio Medical University in 1893. She was a member of the Ohio Federation of Women's Clubs' Committee on State Institution and Legislation and delegate to the Ohio State Conference of Charities and Correction in 1914.