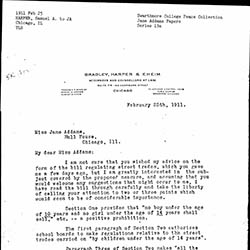 Samuel A. Harper was a lawyer who worked at Bradley, Harper & Eheim. A specialist in insurance and worker's compensation, Harper was trained at the Kent College of Law and the University of Michigan. After working as a prosecutor in Indiana, he moved to Chicago in 1901. He was assistant attorney to Governor Yates, worked for the Illinois Commission on Occupational Diseases, and drafted early occupational disease legislation. In 1909 he was appointed secretary and attorney for the Illinois Industrial Commission.

Harper married Mary McKibbin in 1904 and had a son, Samuel, Jr. He divorced his wife and then married Emy Harper, with whom he had a son, Robert.