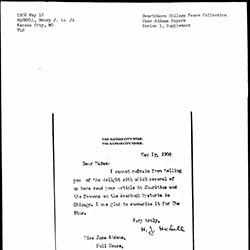 Hi Donald-- Thanks so much-- I have fixed that typo.

Henry J. Haskell was a newspaper reporter and editor with the Kansas City Star. He began work in 1898, becoming director of the editorial page in 1910 and editor in 1928. Under his direction, the Star won two Pulitzer Prizes. Haskell died in 1952.