Our Ex-Enemies and Their Industrial Efficiency, January 27, 1921 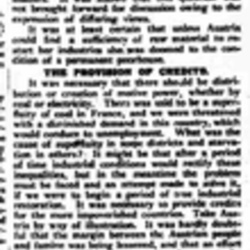 OUR EX-ENEMIES AND THEIR INDUSTRIAL EFFICIENCY.

In the course of an address to the Union Society of the London School of Economics on "Central Europe" last night, Lord Parmoor, by way of making some contribution to the attempt to restore Europe to normal industrial conditions, admitted that it was probably too early to attempt a dispassionate analysis of the conditions prevailing in that part of the world; but he thought that it was being slowly [realized] that all Europe is in one sense an industrial unit, of which no part could suffer without causing injury to the whole.

The question which had come to the front was not whether we could further depress our ex-enemies in the direction of ruin and starvation, but what steps we could take to restore their industrial efficiency, or at least to restore their power to become productive commercial units. Those who [favored] tariffs and Protection desired that each country or empire should retain and [monopolize] the raw materials to be found within their territories. It followed that countries or empires less [favorably] situated must either perish industrially or fight to obtain their share of what was essential to a progressive industrialism. It was important to note what passed under this head when the League of Nations met at Geneva. The chief work of the League was probably economic and judicial. At any rate, one of its main functions should be to safeguard international interdependence in trade matters. It was known that this question was not brought forward for discussion owing to the expression of differing views.

It was at least certain that unless Austria could find a sufficiency of raw material to restart her industries she was doomed to the condition of a permanent poorhouse.

THE PROVISION OF CREDITS.

It was necessary that there should be distribution or creation of motive power, whether by coal or electricity. There was said to be a superfluity of coal in France, and we were threatened with a diminished demand in this country, which would conduce to unemployment. What was the cause of superfluity in some districts and starvation in others? It might be that after a period of time industrial conditions would rectify these inequalities, but in the meantime the problem must be faced and an attempt made to solve it, if we were to begin a period of true industrial restoration. It was necessary to provide credits for the more impoverished countries. Take Austria by way of illustration. It was hardly doubtful that the margin between the Austrian people and famine was being lessened, and that an effort must be made if a great catastrophe was to be avoided. The printing press was not a source of industrial protection, and poverty followed the growing inflation of a depreciated currency. There was a general consensus of opinion that the first necessity in aiding Austria was to enable the Austrian Government to put an end to the further creation of more paper money. Several schemes had been suggested. One of them, considered feasible by business men of great financial experience, and which, apparently, had the support of the Austrian Reparation Commission after full inquiry, was that Austria should raise a sufficient loan, to be guaranteed internationally over a period of time. The amount mentioned by the Reparation Commission was £50,000,000 or £60,000,000, over a period of years.

The finances of Austria would at the same time be placed under the control of an international commission. The first object would be to stop the creation of paper credits -- in other words, to make the Austrians a solvent nation. Any surplus funds would be nursed by that commission for use only in directions which might help to restore the old industrial conditions. It must necessarily be a question of time to restore Austria but this proposal was the most hopeful which had been brought forward, and gave at least some hope of a better future.

"I am at any rate convinced," Lord Parmoor concluded, "that those who desire a peaceful and settled Europe must earnestly hope that some effort should be tried of permanent restoration, and that we should not rely on temporary donations or doles. We must [realize] the necessity of restoring industrial conditions in a society such as Europe, founded on industrial [organization], that there is nothing impossible if the will to succeed exists, and that there is no alternative except a renewal of antagonisms which imply ultimately the ruin of a [civilization] founded on industrialism." 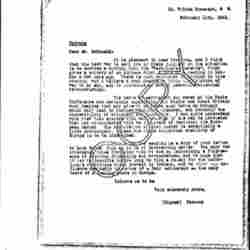 Cripps argues that Europe in a single industrial unit and a punitive peace treaty will impact all countries.