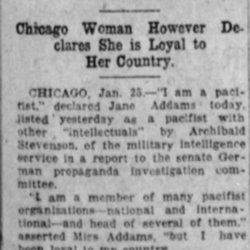 JANE ADDAMS ADMITS STAND AGAINST HER

Chicago Woman However Declares She is Loyal to Her Country.

CHICAGO, Jan. 25. -- "I am a pacifist," declared Jane Addams today, listed yesterday as a pacifist with other "intellectuals" by Archibald Stevenson, of the military intelligence service in a report to the senate German propaganda investigation committee.

"I am a member of many pacifist organizations -- national and international -- and head of several of them," asserted Miss Addams, "but I have been loyal to my country.

"I did not see the Stevenson list and do not know how I got on it, but I cannot change my convictions. I have been against wars for many years. I believe there may be found other methods of adjusting relations between nations and I believe it will be speedily found at the Paris conference."

Addams responds to Archibald Stevenson's inclusion of her on a list of pacifist and maintains that she is loyal to her country.